Austin, Texas – (January 6, 2020) – Rivet Networks is incorporating artificial intelligence (AI) into its Killer Intelligence Engine to help customers establish and maintain stronger and faster wireless connections. Online experiences are often defined by the quality of the Wi-Fi connection, which can be challenging because unlike CPU or Graphics technology, the PC’s network performance is influenced by a large number of outside variables that change on a minute by minute basis. By using AI to constantly monitor and score available Wi-Fi networks, the Killer Intelligence Engine is able to direct a user to the best available access point.

Moving a user to a better access point can reduce latency by up to 50% and increase throughput by over 100%. Below are three ways the Killer Intelligence Engine can significantly improve PC networking performance:

3) The Killer Intelligence Engine leverages other Killer technologies to improve networking performance. It works with Killer DoubleShot Pro by evaluating the health of each Killer interface and then making sure that critical traffic goes over the healthiest interface (either ethernet or WiFi). It also feeds the Killer Prioritization Engine key information that helps better prioritize traffic. For example, the Killer Intelligence Engine will alert the Killer Prioritization Engine of an unhealthy WiFi environment which leads to additional protection of game traffic.

For more information or to download the Killer Intelligence Engine, please visit www.killernetworking.com. For inquiries to arrange an interview, a demo, or other questions for the Rivet Networks leadership team, email us at pr@rivetnetworks.com. About Rivet Networks Rivet Networks is a technology and products company that focuses on creating the best possible networking experience. Rivet offers a mix of hardware, software and cloud-based technologies to deliver solutions that are both powerful and intuitive. Through their Killer™ line of networking products, Rivet Networks offers unprecedented speed, intelligence and control for gamers and performance users alike. For more information about the Killer brand of technologies, please visit http://www.killernetworking.com.

(15603)
$9.99 (as of February 1, 2023 15:54 GMT -05:00 - More infoProduct prices and availability are accurate as of the date/time indicated and are subject to change. Any price and availability information displayed on [relevant Amazon Site(s), as applicable] at the time of purchase will apply to the purchase of this product.)

(11916)
$79.99 (as of February 1, 2023 15:54 GMT -05:00 - More infoProduct prices and availability are accurate as of the date/time indicated and are subject to change. Any price and availability information displayed on [relevant Amazon Site(s), as applicable] at the time of purchase will apply to the purchase of this product.)

We are sponsoring a giveaway during an esports match featuring

On Thursday, the FTC filed a complaint to block the 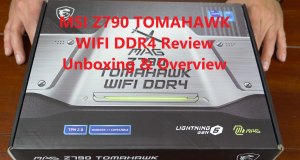 An anonymous hacker has leaked what Rockstar Games dubs as early GTA:VI footage and information.

Originally reported through an interview between Gamer’s Nexus and EVGA’s CEO Andrew Han, it seems

We had to take a long leave of absence for almost a year, and this