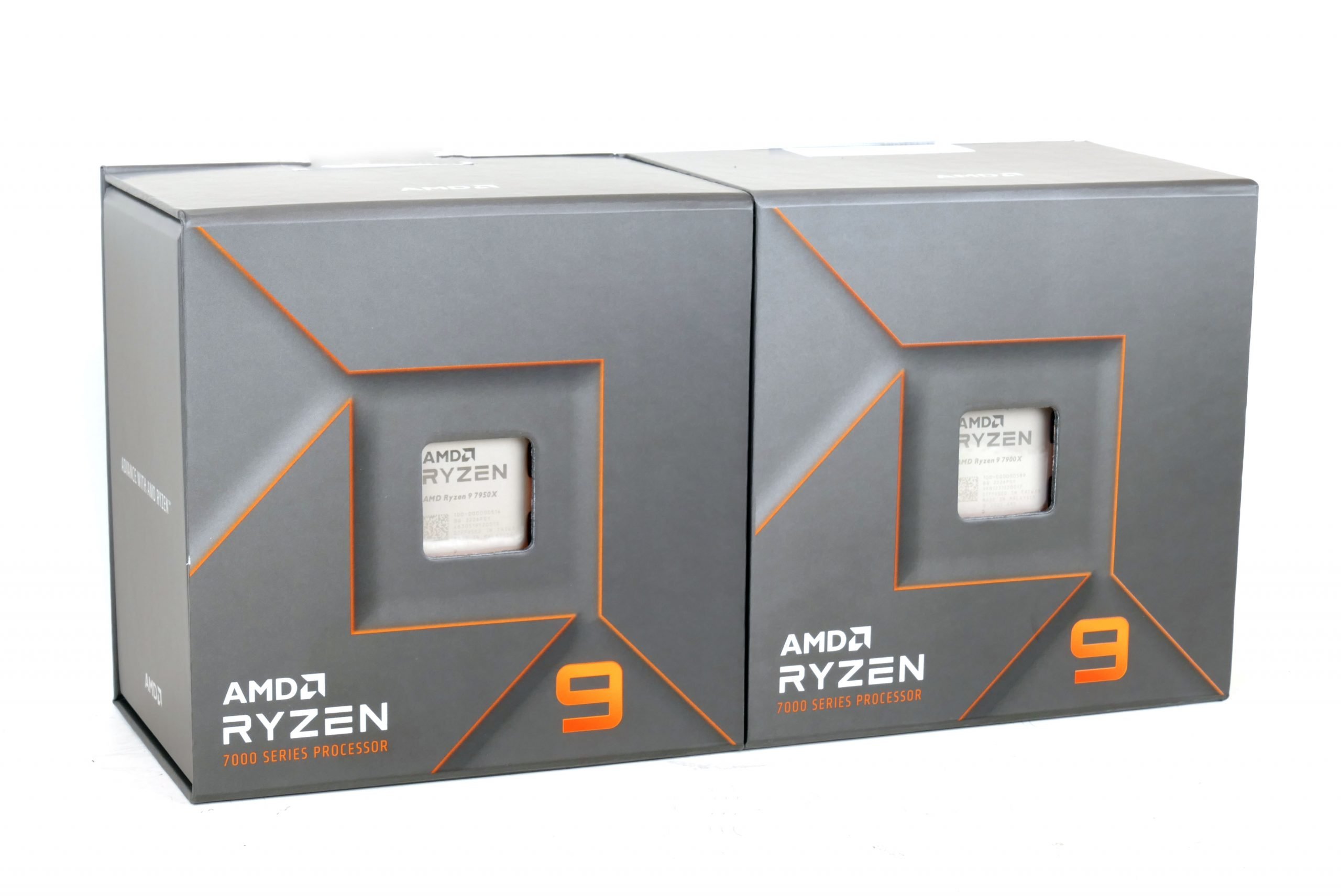 At the top of AMD’s latest Zen 4 line up are the Ryzen 9 7950X and Ryzen 9 7900X processors, and today we are going to put them through the ringer so we can figure out exactly where they fit in our performance charts. These CPUs are high core count, high performance cutting edge microprocessors meant for power users, enthusiast, and gamers. The boxes for the 7950X and 7900X are double the width of the 7700X and 7600X boxes, which might indicate double the CPU inside.

Inside the box we find the CPU and an installation manual. Each CPU also comes with a case badge sticker that indicates it is a Ryzen 9 7000 series CPU.

The CPUs look quite formidable, and look almost identical to their Ryzen 5 and Ryzen 7 counterparts.

The two Ryzen 9 CPUs dominate in Blender, which is not surprising as Blender has traditionally been very thread dependent.

In manually set 4K to 1080P transcoding, the Intel 12600K was slightly overtaken by the AMD Ryzen 9 CPUs. The Ryzen 9 CPUs try to close the gap between the Ryzen 7 and the 12th generation Intel CPUs, but fall a bit short.

AMD typically comes out strong in floating point performance, but in this case the 7950X beat out the 12900K with ease in both floating point and integer operations.

Memory bandwidth scores are generally slightly better on the 7900X and 7950X compared to the 7700X and 7600X, with an added boost specifically in the memory read test.

In this legacy benchmark, AMD does really well across the board.

We did not expect the 7950X to beat the 7700X in this benchmark. However, SuperPI tends to scale quite well with memory latency, high clocks, and IPC. The high single-core boost speed on the 7950X help it top our charts.

Intel had the lead here before we introduced the 7950X and 7900X into the charts, and it still has the lead.

We are seeing a trend here that we expected; AMD’s 7700X is doing better than the 7950X and 7900X. We believe for starters that it partially had to do with what the CPUs are designed to do. The 7950X and 7900X are very strong CPUs in their own right, but the 7700X seems to be ahead of them in synthetic benchmarks where the CPU is pushed so far that temperature might hold it back.

FireStrike has always been geared towards CPUs with more power, and the 7950X and 7900X both displace the 12900K from the lead in Physx tests, which is very CPU bound.

Once again Intel wins this benchmark against AMD, but AMD’s 7700X and 7600X beat out the 7950X and 7900X. Ashes of the Singularity: Escalation has traditionally been geared towards CPUs that offered more of everything, especially core count, but it seems core count alone can’t account for thermals. Ashes will push all cores very hard, and in this case the 7700X does well because it isn’t hitting its throttle point.

All the CPUs excel at GTA:V, but if we focus more on the minimums we can see the 12900K and AMD’s Ryzen 7 7700X provide better performance.

For overclocking, the first thing we did with each CPU was run the Curve Optimizer (CO) to see what it came up with. Once we ran CO, we enabled EXPO for our memory in the UEFI and ensured the uclk=memclk, it seemed a lot easier than trying to have Ryzen Master do it. Then we tuned the CPUs a bit more. The Ryzen Master software basically tunes each core by itself and then as a whole to see how far it can push, sort of like training CPU cores as a motherboard would initiate DRAM training. Needless to say it took almost 3 hours to tune the 7950X, so the more cores you have, the longer it takes.

We used the curve optimizer (CO) as a starting point, but considering it gave us -30 for each core on the 7950X and 7900X (except the 7900X’s two best cores were rated -28) we decided to test for ourselves. We found that if we applied an offset to the -30 of +8 on the 7950X and +12 on the 7900X things became stable on all cores. The -30 offset would indicate the core could run at a higher speed with a lower voltage than default, but some cores need more voltage. To alter that -30 value, an offset in the opposite direction is added to decrease the voltage slightly less during load shifts. An offset of +8 would rest in -22 curve value, which would mean slightly more voltage than -30. In general, you want to aim for the lowest curve value as that will require the least amount of voltage, which results in more headroom temperature wise for cores to boost higher. It’s not perfect, but it gets the job done quickly. There are other ways to overclock the CPU, but once we found the CO values and offset we engaged Performance Boost Overdrive (PBO).

Scores did go up in CINEBENCH R23 by a little bit, but in the end we saw all core clocks to around 5.25GHz and single core boosts up to 5.75Ghz on the 7950X. These CPUs tuned close to their maximum out of the box boost values. The throttle point seemed to be our biggest issue, but that was expected behavior since it did hit 95C out of the box, hence the negative CO values. It is like fancy undervolting per core to open up boost potential. The 7700X and 7600X were better tuned through the Curve Optimizer and didn’t seem to throttle that much. There are some motherboards with a hybrid type tuning, were you can set an all core overclock and then it will switch over to Performance Boost Overdrive (PBO) when loading changes to fewer cores, but they require extra hardware on the motherboard. MSI calls it Enhanced Mode and GIGABYTE calls it Active OC. It didn’t do that much for us when we tried it.

Our feelings on these CPUs based on the empirical evidence we have gathered leads us to the conclusion that AMD’s 7950X and 7900X beat Intel’s current 12th generation offerings where AMD’s 7700X and 7600X didn’t. However, that doesn’t mean they are better in every scenario than their Ryzen 7 and Ryzen 5 counterparts. The Ryzen 9 CPUs completely dominate where thread count is in demand while still maintaining solid single threaded performance. However, the price points of the Ryzen 5 and 7 CPUs we tested, coupled with their very strong gaming performance, leads us to believe they are better if that is your need. In a mixed use scenario where someone wants to game and stream and record at the same time in a circumstance dubbed “megatasking” the 7950X and 7900X are much better options because of their flexibility and higher core counts. If we take price into consideration the Ryzen 7 7700X and Ryzen 5 7600X become more attractive options, but keep in mind the 7950X and 7900X are the cream of the crop in regards to binning and frequency potential; or at least one of their CCDs are.

We have come to expect high-end desktop platforms like Intel’s X-Series and AMD’s Threadripper CPUs to pull over 300W with just CPU loading with ease, but we seem to be in an era of high power consumption all around. Graphics cards are requiring over 1kW power supplies and CPU vendors have decided to just unlock their default power restrictions on high-end products and skip the included cooler altogether. Thankfully, we get performance headroom in exchange. While efficiency doesn’t scale in a linear fashion, we like to have the knowledge that if we want to put the pedal to the metal the CPU wont artificially slow us down, even in its default configuration. Don’t worry if that isn’t what you are looking for; AMD still has your back with ECO mode.

All that heat through two small dies under a heat spreader really push temperatures. However, people forget the level of shock in the past when Intel had shrunk its processing node in larger steps; eventually the norm for acceptable temperatures changes. In the end, the Ryzen 9 7950X and Ryzen 9 7900X are two of the most powerful CPUs currently in our charts if not the most powerful CPUs we have ever tested. Nothing we have tested in our decades-long history has involved so many cores at such a high frequency with such unwavering performance. AMD delivered the Ryzen 9 7950X and Ryzen 9 7900X with consistent high-performance capabilities and the capacity to handle anything throw at it.

(105)
$197.16 (as of November 30, 2022 15:28 GMT -05:00 - More infoProduct prices and availability are accurate as of the date/time indicated and are subject to change. Any price and availability information displayed on [relevant Amazon Site(s), as applicable] at the time of purchase will apply to the purchase of this product.)

(83)
$694.26 (as of November 30, 2022 15:28 GMT -05:00 - More infoProduct prices and availability are accurate as of the date/time indicated and are subject to change. Any price and availability information displayed on [relevant Amazon Site(s), as applicable] at the time of purchase will apply to the purchase of this product.)

(111)
$99.95 (as of November 30, 2022 15:28 GMT -05:00 - More infoProduct prices and availability are accurate as of the date/time indicated and are subject to change. Any price and availability information displayed on [relevant Amazon Site(s), as applicable] at the time of purchase will apply to the purchase of this product.)

(1226)
$154.99 (as of November 30, 2022 15:28 GMT -05:00 - More infoProduct prices and availability are accurate as of the date/time indicated and are subject to change. Any price and availability information displayed on [relevant Amazon Site(s), as applicable] at the time of purchase will apply to the purchase of this product.)