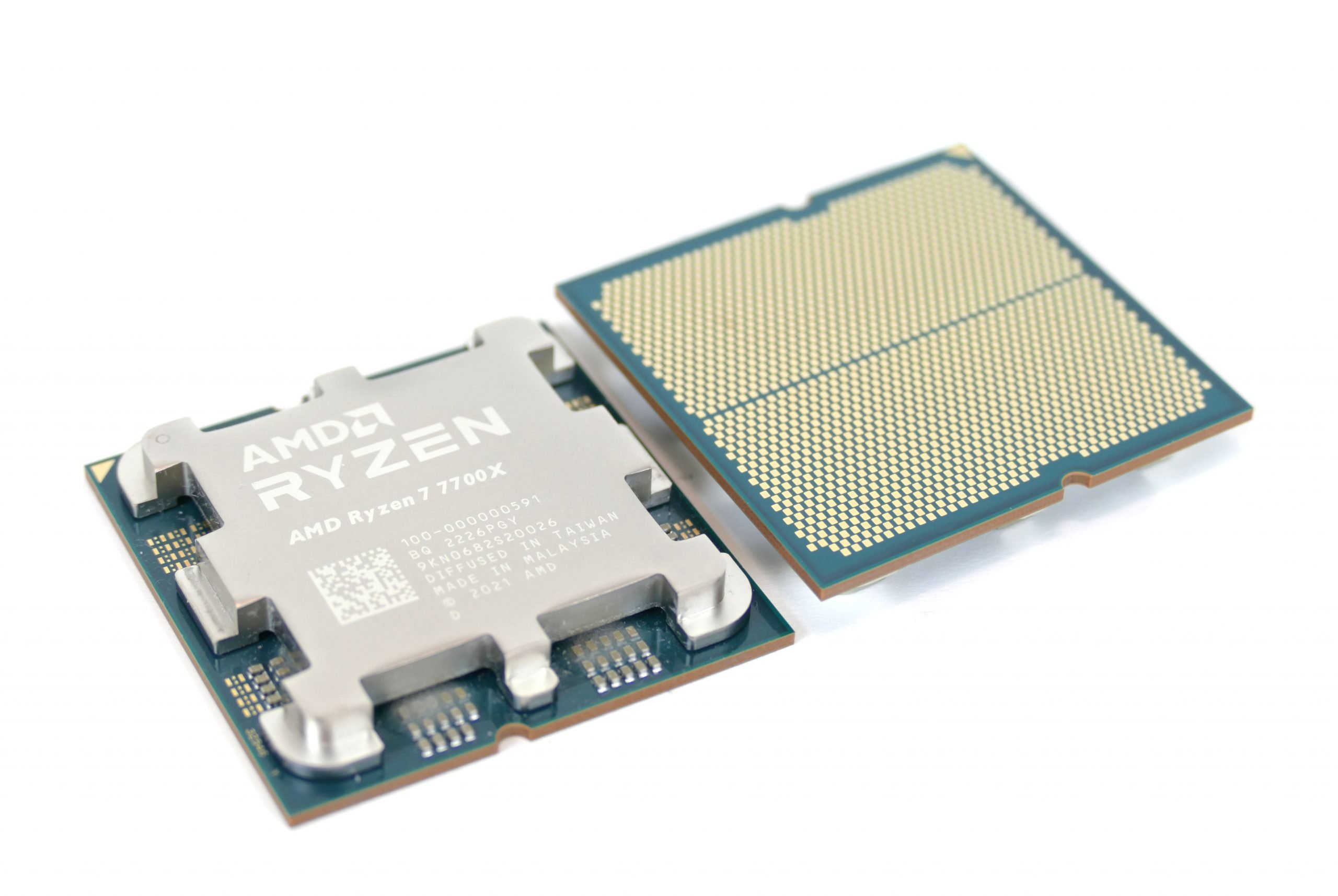 AMD’s Ryzen 7 7700X and Ryzen 5 7600X just landed ushering in a new era of high-performance desktop computing for AMD. Utilizing the latest 5nm process technology from TSMC along with a revamped microarchitecture and very high clock speeds, the new “Raphael”Zen4 CPUs are here to make their mark in history.

The boxes are quite simple, and neither the Ryzen 7 7700X nor the Ryzen 5 7600X come with a CPU cooler. A decent air cooler is recommended for either one of them, but we used an all-in-one watercooling system.

Not too much to see here. The contents are literally just the CPU, a case badge, and a warranty information pamphlet.

We are very happy to see the pins go! The CPU features a revamped heat spreader with more openings for thermal expansion. We figure it might be hard to clean if thermal paste gets into the gaps, so you should be careful. On the bottom of the CPU we find the first AMD LGA mainstream consumer desktop pad array. We have a ton of gold pads laid out to match the 1718 gold plated pins in the AM5 socket. The 7700X and the 7600X each feature a single CCD (Core Complex Die, 5nm) with 8 cores in it as well as an IOD (I/O Die, 6nm). The 7900X and 7950X each have two CCDs, but they have the same IOD as the 7700X and 7600X. The IOD features the memory and PCI-E controllers as well as the integrated RDNA2 graphics.

The new CPUs chime in with the above specifications. AMD’s improvements on the uArch side include improved branch prediction, larger L1 and Op cache, and double the L2 cache for each individual core to 1MB. Each CCD has 32MB of L3 cache, plus the 1MB per core of L2 cache, which results in the cache numbers above.

The slide above shows us the biggest contributors to the IPC uplift in Zen4 compared to Zen3. The CPU was optimized with an increased cache budget, improved branch prediction, larger load queue, a 68% larger Op cache, and a wider front end. AMD also added double wide units for AVX512.

CINEBENCH R23 is possibly one of the most popular benchmarks these days, and it can quickly reveal how the new CPUs stack up. For starters, The 7600X and 7700X Zen 4 CPUs are easily living up to AMD’s promises. Not only is their multi-threaded performance improved upon Ryzen 5000 series Zen3 CPUs, but their overall single threaded performance is so strong that the only CPU in our charts that can beat the 7700X is the 12900K, and that is by a small margin.

Blender is where AMD’s SMT enhancements really shine. The 7700X is competing with much higher core and thread count CPUs, blasting every 8-core CPU out of the water. Here is the real kicker; the 6-core 7600X pretty much matches both the 11900K and 5800X in SMT, but with 25% fewer cores.

Remember those big jumps we saw when Intel’s Alder Lake CPUs launched? Well, AMD is doing a good job of closing that gap.

Even closer in these HandBrake tests. We should note that HandBrake is not a 100% all core load all the time when the workers are transcoding, it is more of a mixed load. The 7700X beats the 12900K in the Discord Nitro transcode, which is impressive considering the 12900K features 24 threads and 16 (8P+8E) cores while the 7700X chimes in at 16 threads and 8 cores.

AMD and Intel trade blows again and in this match Intel wins a few games. At the same core and thread count Intel still is very strong in integer performance and AMD is holding it down with floating point.

DDR5 memory results, soon enough we hope everything will just be DDR5 in our charts.

Comparing these latency results at the same DDR5 speeds between AMD 7000 series and Intel’s 12th generation processors reveals that AMD has improved on this front compared to previous generations. They not only closed to gap but slightly flipped the trend. AMD’s DDR4 Ryzen CPUs consistently had higher DDR4 latency for the most part, but here they are doing better than their Intel counterparts.

Once again one of the more legacy benchmarks, ScienceMark cannot detect the correct memory architecture in Ryzen 5000, Ryzen 7000, or Intel 12th generation CPUs. The test falls back on its failsafe default memory tests, they are only really comparable within their own generations. The other tests such as molecular dynamics and cryptography seem valid enough and show us mixed use scientific application performance.

SuperPI is very dependent on memory latency and CPU frequency, and is a good indicator of single threaded performance. AMD takes the cake with this benchmark. We should mention that Windows 10 results might differ. We tested both Windows 10 and 11 across most processors in this chart and the results showed significant variance between the two OS versions for one generation of Intel CPUs.

Those CPU performance benchmarks weren’t just for show, we can see that they are translating pretty nicely into synthetic gaming benchmarks.

In Firestrike the two latest generations of CPUs are trading blows.

AMD’s 7000 series CPUs topped the charts again, but this time at a much lower resolution.

As we take the resolution up to more realistic levels, we can see that the chart leaders change up.

AMD must not have liked that big gap between their 5000-series Zen 3 processors and Intel’s 12th generation processors, as they really closed the gap and flipped the tables.

The 7700X and 7600X are performing exceedingly well in gaming benchmarks.

The 7700X and 7600X are doing great here, and while they didn’t exactly beat Intel’s 12th gen. CPUs, they sure did close the gap by a large margin.

Here we can see total platform power and how it differs across different generations including changes in DRAM and chipsets. We should mention that the 7600X did not ever reach it’s maximum safe operating temperature of 95C, but the 7700X did with ease without an overclock. The power limits on these CPUs are pretty much unlocked to a certain point.

For overclocking we, manually set the system through the UEFI to load our 6000MHz DDR5 EXPO Profile, we also had to set MCLK=UCLK instead of MCLK=1/2*UCLK, and then we went and chose the maximum power limits in the UEFI, saved and then entered into Windows. We were told these new CPUs prefer PBO style overclocking, so we ran the core optimizer for each core, and on both CPUs ended with a result of -30 for each core. The Curve Optimizer basically effects the V/f curve. A negative value equates to a larger voltage drop to allow for better boost performance as these CPUs tend to be thermally limited and not limited by power.

That means if the CPU can take a lower voltage it could give you more PBO headroom because it will run cooler and that is important in the boost algorithm. Our PBO scaler was set to 10X, the maximum, and this basically plays with the CPU’s internal sensors to allow for more OC headroom. You can also set a maximum boost in PBO for up to 200MHz, which we did. We did not manually set voltage, we opted for the curve optimizer instead. We did try manually overclocking the CPU, and results were similar to PBO, but you cannot set individual core frequency differently without PBO, so our best and worst cores all would have to run at the same speed without PBO.

If you try and manually OC the cores at different frequencies through Ryzen Master, the CPU falls back to its failsafe base speeds. So on the 7700X, let’s say you set 6 of the 8 cores to 5.5GHz, and then the best and second best core to 5.65GHz under manual tuning in the program. When you hit apply you will se that in CPU-Z the reading is 5.65GHz, but if you right click to see each cores frequency you will find that all your cores except your top one are running at 4.5GHz (the base). So we just messed with PBO for now, since it should be able to dynamically handle all that. Our manual OC of the 7700X with manual voltage to 5.55Ghz was the same as what PBO delivered.

Here are the results from the 7700X, a 5.55GHz overclock on all cores was not impossible.

The results from the 7600X came out to 5.50GHz all cores, and we could manually tune this in too. We suggest playing with the voltage, since our 7600X wasn’t coming that close to 95C, we increased its voltage a bit and performance increased a tiny bit as well. These CPUs get very hot at around 1.35v. PBO settled for something around 1.26v on both the 7700X and the 7600X using PBO with a -30 curve optimizer.

AMD did an excellent job with their new Ryzen 7 7700X and Ryzen 5 7600X Zen4 CPUs. The new platform is also very nice, and it is very stable for AMD’s first consumer DDR5, PCI-E 5.0, and LGA rollout. While it is an expensive platform, it does seem like AM5 will be future proof.

We did not expect these results to be so strong and impress as much as they did. AMD pulled out all the stops with these CPUs. They did three things to make this happen. First, they were able to boost clocks by a very large margin using the new TSMC 5nm process. Then they were able to increase IPC with microarchitecture improvements such as front-end enhancements and cache restructuring. But the one final thing they did was remove hindering power limits, much like their competition has been doing. According to AMD, they didn’t change their precision boost algorithm, but instead it seems like they just stuck a key into the lock and turned it and left it up to the CPU whether or not it felt comfortable turning things up.

AMD’s new CPUs are pretty much like Ferrari race cars, but more like track cars rather than street-legal cars, which is what people want in this segment of the industry. The advances brought forth also allow them to be extremely efficient if the user wants to go that direction, which is a nice touch as well. In the end it worked really well, AMD delivered with the Ryzen 7 7700X and the Ryzen 5 7600X, both of which are receiving the Editor’s Choice Award.

(83)
$694.26 (as of November 30, 2022 15:28 GMT -05:00 - More infoProduct prices and availability are accurate as of the date/time indicated and are subject to change. Any price and availability information displayed on [relevant Amazon Site(s), as applicable] at the time of purchase will apply to the purchase of this product.)

(467)
$183.47 (as of November 30, 2022 15:28 GMT -05:00 - More infoProduct prices and availability are accurate as of the date/time indicated and are subject to change. Any price and availability information displayed on [relevant Amazon Site(s), as applicable] at the time of purchase will apply to the purchase of this product.)

(41696)
$117.89 (as of November 30, 2022 15:28 GMT -05:00 - More infoProduct prices and availability are accurate as of the date/time indicated and are subject to change. Any price and availability information displayed on [relevant Amazon Site(s), as applicable] at the time of purchase will apply to the purchase of this product.)

(3039)
$219.99 (as of November 30, 2022 15:28 GMT -05:00 - More infoProduct prices and availability are accurate as of the date/time indicated and are subject to change. Any price and availability information displayed on [relevant Amazon Site(s), as applicable] at the time of purchase will apply to the purchase of this product.)