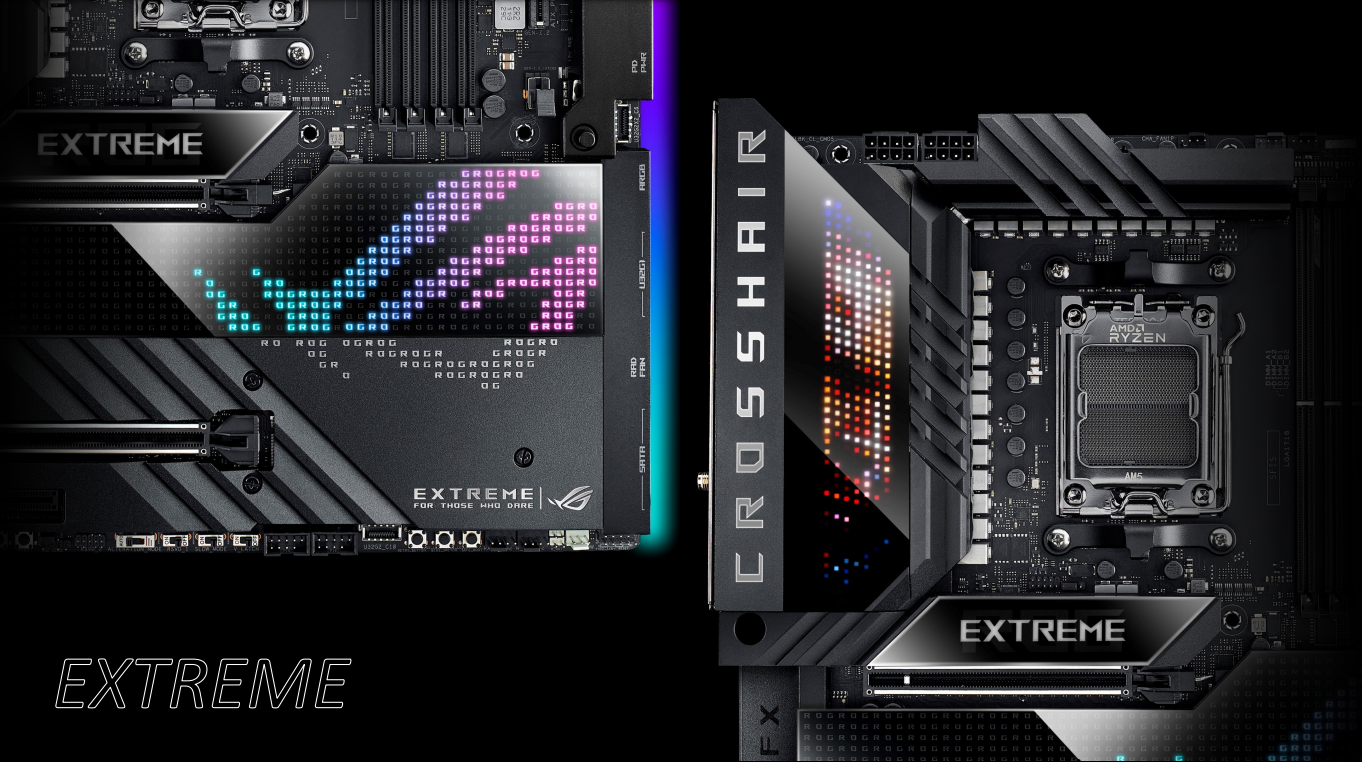 The ASUS Crosshair X670E Extreme is ASUS’s top of the line motherboard. It features a monochromatic design with integrated LEDs called the AniMe Matrix LED display. The motherboard’s rear IO is busy with USB. There are a total of four USB type-C ports; one 10Gbps (USB 3.2 Gen 2), one 20Gbps (USB 3.2 Gen 2×2), and two 40Gbps USB 4.0 ports. The USB 4.0 ports also offer DisplayPort, and much like Thunderbolt 3.0, requires a chip. We also find eight USB 3.2 Gen 2 type-A ports , one of which can be used to update the BIOS without a CPU or DRAM installed.

The clear CMOS button and the BIOS Flashback button are both on the rear IO. We can also find a 10Gbit LAN port and a 2.5Gbit LAN port, WIFI antenna for WIFI 6E are also on the rear IO. The audio ports are gold plated and ASUS has brought back the internal LEDs for the ports. The motherboard features five possible x4 M.2 slots, if you utilize the included PCI-E AIC and the new ROG Gen-Z.2. The motherboard itself features three PCI-E 5.0 x4 M.2 slots and the AIC PCI-E card can be used to add another. The last M.2 slot is also a x4 slot, but it is the Z.2 add-in module, and supports PCI-E 4.0 speeds. The motherboard also has two internal type-C headers, one is 10Gbps and the other is 20Gbps that supports up to 60W PD/QC4+. The front 60W PD/QC4+ port is limited to 27W unless you also plug in the auxiliary 6-pin PCI-E power connector into the motherboard. Notice the headers on the right side of the motherboard are all angled at 90 degrees off the PCB.

The ROG Crosshair X670E Hero rear IO is identical to that of the Extreme model sans the 10Gbit LAN and with an added HDMI port. The Polymo LED panel ads some flare to the board as well. The Crosshair X670E Hero features five M.2 slots. Only three (including the one from a PCI-E AIC) are x4 PCI-E 5.0, the remaining two are x4 PCI-E 4.0 located on the board. Internal USB headers are a bit different as well. The 20Gbps type-C header with 60W PD/QC4+ is still present (with same requirement for PCI-E aux plug), but instead of another 10Gbps type-C header we get a type-A 2Gbps internal header. Both the Hero and Extreme offer a total of two internal 5Gbps headers. The Hero also offers three USB 2.0 headers while the Extreme only offers two.

Power delivery for the CPU is very important on the new platform, and ASUS as well as many others have brought in some very high-end designs. ASUS’s Extreme and Hero share the same Infineon ASP2205 PWM controller and 110A Vishay SiC850 powerstages. The Extreme features a 20+2 phase design while the Hero features a 18+2 phase design, both are indicated as teamed, so the PWM controls 10 PWM lines with two power stages per line.

The audio on the motherboards was also featured in the webinar. The ALC4082 codec is used along with an ESS Sabre ES9218 DAC, which is an upgrade from the ES9023 on the previous generation Crosshair.

Further reading can be found on ASUS’s Microsite and on Reddit.