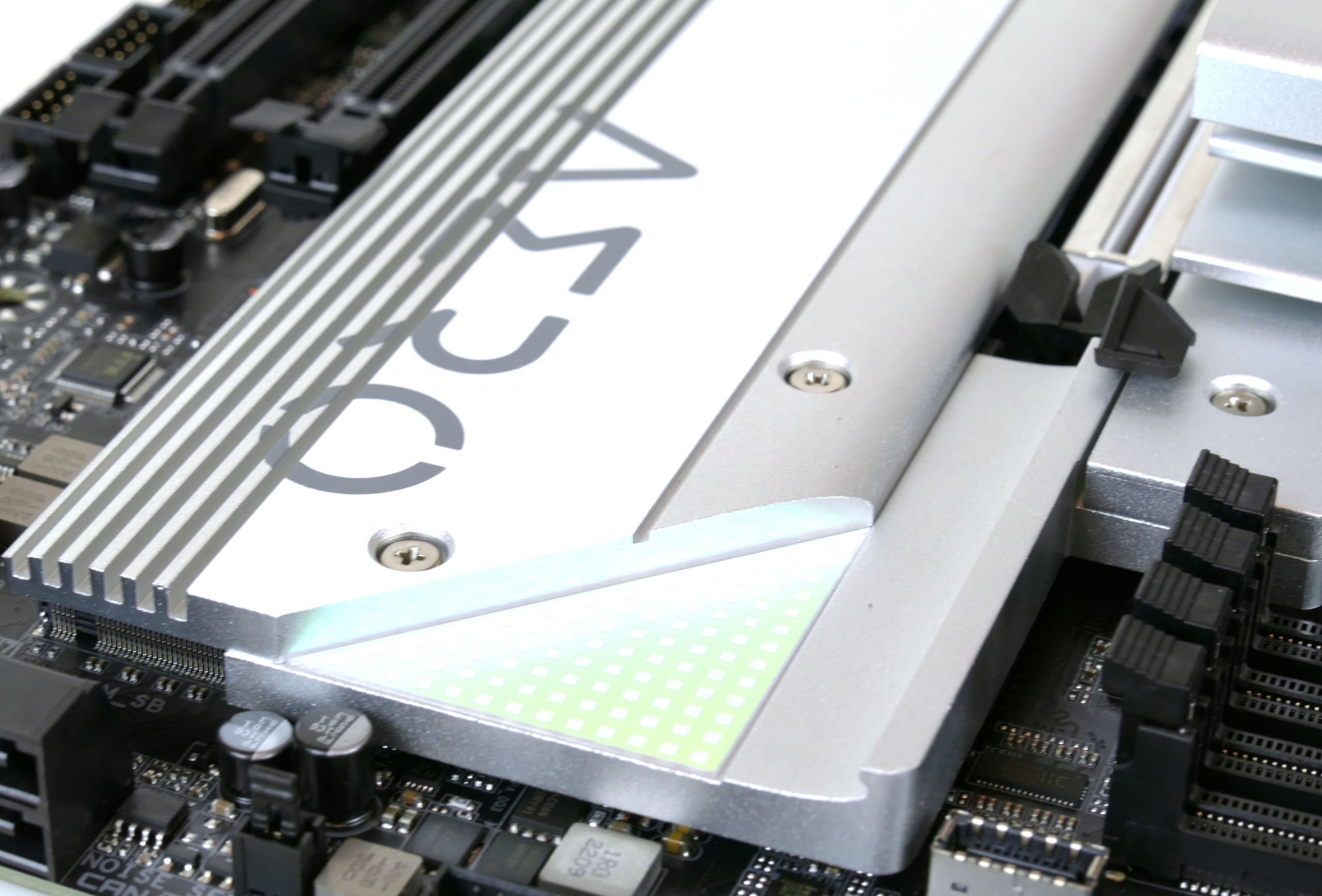 GIGABYTE’s AERO brand is best known for their cutting-edge gaming and creator notebooks, but with recent generations we see the addition of the AERO brand to GIGABYTE’s creator and enthusiast motherboard line up. AERO motherboards offer a different aesthetic appeal and some different features geared more towards content creators, but still maintain high-quality components and attention to detail. Let’s take a look at what the AERO brand has to offer with the GIGABYTE Z790 AERO G.

The video version of this portion of the review can be found here.

The motherboard’s box features a very simple matte white finish with the phrase “Creator Motherboard” dead center. The box look and feel is almost akin to that of an apple product, and is a very strong departure from GIGABYTE’s former “Designare” creator brand.

Photographing the accessories and even the motherboard proved to be a challenge so we left some background shadows to help relate the image better. The accessories include a special edition AERO WIFI 6 antenna, DisplayPort to DisplayPort cable, fan noise level mic, two SATA6Gb/s cables, a warranty guide, and a Vision Link guide.

There is no rear PCB guard on this motherboard, but that shouldn’t be too much of an issue.

The motherboard features both the standard 8-pin and the additional 4-pin CPU power plugs. If you are going to overclock, we recommend using both.

At the top right corner of the motherboard we find two CPU fan headers, an addressable RGB LED header, and a traditional RGB LED header.

Further down the right side of the motherboard we find an internal USB 3.1 Gen1 (5Gb/s) header. There is also a USB 3.2 Gen2x2 (20Gb/s) type-C internal header in this area. Near the two pump fan headers we find an EC temperature header meant for the addition of an external temperature sensor.

There are also boot status LEDs near the right edge of the motherboard as well as different types of GPIO headers for additional hardware such as a Thunderbolt card. A noise sensor header is also included for the internal microphone that comes in the package.

In the bottom right hand corner we find a reset switch along with a jumper, which actually doubles as a MULTIKEY. You can program this offer direct to BIOS, safe boot, RGB LED control, and act as a reset button. The secondary EC sensor header is in the lower right corner.

A QFlash+ button is located at the bottom of the motherboard and can be used to flash the UEFI BIOS ROM without a CPU or DRAM installed. There are two USB 2.0 internal headers as well as a SPI header.

The addressable RGB LED header is located near an RGB LED header, and there is also a COM header port here. The little LED_DEMO header is for a 5v power source to light up RGBs on the motherboard without a PSU, but there are almost no RGB LEDs built into this motherboard.

The heatsinks are actually better than expected. Not only are both the power stages and the inductors cool down, there is a direct touch heatpipe under the thermal pad that helps to cool down the power stages.

The motherboard has a lot to show without its heatsinks.

The VRM here is in a 16+2+1 phase configuration for the VCore, VCC AUX, and iGPU voltage rails.

The ON Semiconductor NCP81530R is the PWM used and outputs 8+1 phases for the CPU core and iGPU phases. The 16 CPU VCores are doubled up from eight PWM channels by using double the components. There are a total of 16 ON Semiconductor FDMF5062 70A integrated power phases.

The On Semiconductor NCP302155 integrated power stage is used for the VCCGT, it is rated 55A.

The Monolithic Power Systems MPS2940A two phase PWM controller is used here to control the two On Semiconductor VCC Auxiliary phases, which are the 60A NCP303160.

The JoulWatt EV5068A is another step down converter near the DRAM area with a 3.3v output, which is coincidentally what the DDR5 PMIC is set to take.

One of the higher-end audio codecs found on these generally expensive motherboards, the REaltek ALC1220 is used to provide the line out and mic in ports on the rear IO panel as well as the S/PDIF output for digital audio. There is a physical isolation on the PCB for analog audio signals and some high-end audio capacitors for improved audio.

The 2.5Gbit LAN controller is an Intel i225V and is revision B3. The WIFI on this motherboard comes from an Intel AX211.

Here we have a lot of USB hardware to talk about. We will start from left to right. We have a Pericom PI3EQX1004 that re-drivers the two 10Gb/s USB 3.2 Gen2 ports. A Realtek RTS5450 is a type-C 10Gb/s power delivery chip used for one of the type-C ports. Along with the Realtek USB power delivery controller, we find a Pericom PI2DPX1066 type-C DP-alt mode re-driver, and a Texas Instruments TS3DV642 video signal switch to switch between the internal signal or an external DP signal for the VisionTek 10Gb/s USB 3.2 Gen2 w/DP alt mode capability. There is also a PI3HDX1204 HDMI re-driver and level shifter for video output from the integrated GPU in some CPU models. Realtek RTS5411 is a USB 3.0 hub for the rear USB 3.0 ports.

This is an ON Semiconductor NCP81239 USB power delivery controller and accompanying MOSFETs for what we assume is VisionLink.

The ITE IT8689E is the main super I/O controller that offers all fan control on the motherboard and other SuperIO general features.

There is also an ITE IT87952E EC microcontroller that has been found on GIGABYTE motherboards for many years and generations, it handles a lot of secondary functions like RGB LED control and extra functionality for fan control, MULTIKEY and basically the main SuperIO can’t offer on its own.

Here we find a MXIC 256Mbit 32MB BIOS ROM along with its IT5701E QFlash Plus chip, exclusively used on GIGABYTE motherboards for full Q Flash Plus capability.

The Texas Instruments GD75232 is a drivers and receivers chip used to provide COM port support and functionality.

Physically the motherboard is solid as a rock, and we actually used it in our 13900K review, and we had no problems even driving over 300W through the VRM with ease. We aren’t the biggest fan of how the top M.2 slot will take down your x16 slot to x8, but you do get four other slots that can handle those drives. We do like GIGABYTE’s video and type-C implementation on this. We will have a second part of this review with a BIOS over you and various performance reports, so stay tuned!

Here are some extra pictures: