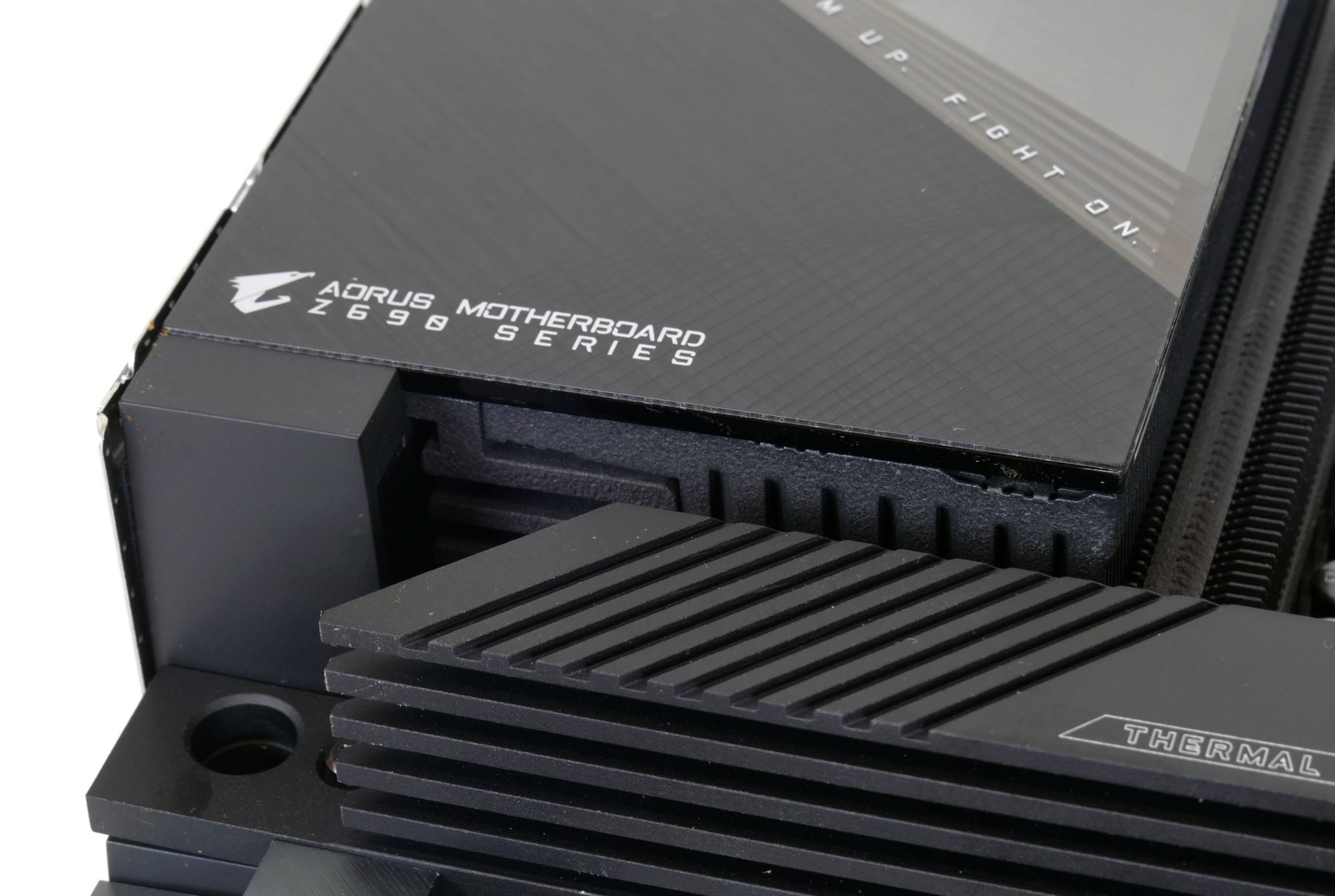 Today we are tackling our first Z690 chipset motherboard that ushers in the new era of PCI-E 5.0 and DDR5 compatible PCB designs that require a much higher level of engineering and quality compared to previous Intel chipset motherboards, so let’s see how GIGABYTE’s high-end Z690 Aorus Master competes.

Video Part 2 (Teardown and IC Analysis) can be found here.

The motherboard box is very similar to what we have seen in past Aorus products; it is about high performance gaming. The packaging and box are very sturdy; this is no cheap cardboard package. The motherboard is protected inside by an anti-static foam enclosure.

Accessories are pretty standard except for a few exceptions. We get the typical manual, stickers, SATA6Gb/s cables (six), WIFI antenna, RGB LED extension cable, G-Connector, and M.2 screws. However, we also get a little microphone to detect fan noise range inside of the case as well as two thermistors you can install where ever you want.

The motherboard is covered in aluminum covers that act not only as heatsinks but also cover up some of the circuitry. The audio cover is metal as well. In fact, the only non-metal cover is located near the IO shield area above the vertical part of the fin array used to cool the CPU VRMs, and it’s plastic because it lights up. The the motherboard has a total of 10 PWM/DC mode fan headers all rated 2A/24W. All headers circled red are normal headers, while those circled in blue are pump headers as well as normal fan headers. Those two headers circled in green are where you can plug in your included thermal probes to guide the fan curves. The one header circled in orange is for the dB level microphone, which can be used to detect fan noise and help to adjust fan curves as well.

The back aluminum plate is stylized, but it is really used to reinforce and cool the PCB and its high power components.

Here we have the rear IO panel with its integrated IO shield. The first fun buttons we encounter on this product are for failsafe mechanisms; the clear CMOS memory to reset the motherboard’s firmware and a QFlash+ button that allows flashing of the 256Mbit ROM without CPU or memory installed. We find two WIFI 6E antenna connectors, four USB 3.2 Gen 1 (USB 3.0/5Gbps), six USB 3.2 Gen 2 (USB 3.1/10Gbps) including one type-C port, and a single USB 3.2 Gen2x2 (USB 3.2/20Gbps) type-Connector. Under the 10Gbit LAN port we find a sole USB 3.2 Gen2 type-A port, which will be the port you use for QFlash+ if you ever use it. The type-C connector also directly under the 10Git LAN port is the USB 3.2 Gen2x2 port. You also get a DisplayPort output and 7.1 gold plated audio jacks with S/PDIF out.

These Z690 motherboards make my life easier as no one seems to switch around PCI-E 5.0. Instead, the top slot is almost exclusively x16 PCI-E 5.0 hardwired straight to the CPU and it is like this on most boards from most brands. In this case the x16 slot is using SMT (surface mount technology) because it helps signal integrity and reduces the possibility of picking up electrical noise you might p[ick up from through-hole mounting. GIGABYTE decided to use an 8-layer 2x copper low-loss PCB to improve signal integrity of PCI-E 5.0. The DRAM slots are also SMT. The lower two PCI-E x16 slots operate electrically at x4 PCI-E 3.0 from the PCH, and while the bottom slot is always wired x4 PCI-E 3.0 to the PCH, the top one shares x4 PCI-E 3.0 with the M.2 slot sitting above it.

That is a lot of M.2 slots, that’s all we have to say. However, they are not all equal. The slot closest to the CPU operates at x4 PCI-E 4.0 and is directly routed to the CPU. The two underneath it are PCI-E 4.0, but route through the PCH. The one right above the PCI-E 16x (electrically x4) slot shares all of it’s x4 PCI-E 3.0 with the slot. The last M.2 slot is wired x4 PCI-E 4.0 to the PCH and it also shares some bandwidth with the bottom two SATA6Gb/s ports and it supports SATA M.2 drives as well as normal PCI-E based ones.

Between the DRAM slots and the four PWM/DC fan headers we find voltage read points for specific voltages on the motherboard. In this top right corner of the motherboard we find an RGB LED header and an addressable/digital RGB LED header. A power button is located adjacent to the Port 80H POST code display.

At the bottom of the motherboard right below the SATA ports we find four status LEDs. We also find our front panel headers in the bottom right corner as well as a TPM header and a multikey button. The multikey button is by default a reset button, but it can be configured as a RGB switch, Direct to BIOS, or Safe Mode button in the UEFI. There is also a header that mimics the reset button located between the TPM header and the front panel headers in case you want to hook the multikey function to your case reset button.

The CPU VRM heatsink is one of the most beefy passive radiator heatsinks I have seen in a while. The Fins Array 3 includes copper fins as well as a copper direct touch heatpipe that cool the power stages and inductors that feed the CPU power.

Not surprisingly, the Z690 motherboards don’t have a plethora of complex ICs scattered around like previous generations. That is due to one of the biggest chipset jumps Intel has made in regards to integrating IO capability into the PCH. While we find hubs and switches, there is not one USB 3.0, 3.1, or 3.2 third-party controller on this motherboard. All of it originates from the chipset and there sometimes is a hub involved. Four of the five M.2 slots on this motherboard come from the PCH, and all but one are x4 PCI-E 4.0 capable.

Here we can see the back of the motherboard without the back panel. You can see how those thick PCI-E 5.0 traces route directly to the SMT slot for the PCI-E x16 PCI-E 5.0 slot. You can also see how crystal clear the PCB is of external traces between the SMT DDR5 slots and the CPU socket. All of this is done on purpose to increase signal integrity at the high speeds the PCI-E 5.0 and DDR5 protocols demand.

The VRM for the CPU is loaded up with 19 CPU power phases, one iGPU phase, and two VCCSA phases. The iGPU phase is in the bottom right corner and the VCCSA are at the top left corner of the “L”.

The Intersil/Renesas RAA 229131 is an X+Y=20 digital PWM controller. In this case it is in 19+1 phase mode for the CPU and iGPU. You can have odd numbers when you aren’t using doublers or any type of doubling scheme. The 19 Intersil/Renesas RAA22010540 are Smart Power Stages (SPS) capable of 105A output. The sole Intersil ISL99390 is capable of 90A.

GIGABYTE is using two 70A rated DrMOS and a two phase PWM controller from Monolithic Power Systems (MP2940 and MP87992). Memory power comes from a single buck converter chip from On Semiconductor, the NCP3235, which is capable of producing voltages as low as 0.6v at 15A continuous. The PWM and MOSFETs are all built into the single chip.

For audio we find the good old Realtek ALC1220 as well as an ESS Sabre ES9118 that can produce SNR of up to 125dB. The Marvell Aquantia AQC113C is used as the NBase-T controller to provide up to 10Gbit LAN. WIFI 6E and BT5.2 come from an Intel AX210.

We see the same Pericom/iTE type-C controller combination right near the internal type-C USB 3.2 Gen2x2 header. The Realtek RTS5411 you see above is a USB 3.2 Gen1 (5Gbit/s) hub and produces the four rear USB 3.0 ports.

Here we find the second Realtek RTS5411 USB 3.2 Gen1 hub for the internal USB 3.0 headers. On the right we have a Pericom PI3DBS16 PCI-E 4.0 two lane switch that moves the HSIO from the PCH between an M.2 slot and two SATA6Gb/s ports. There is also a small switch in the picture, the IT5706FN, it takes a signal and then engages the PCI-E 4.0 switch.

The Macronix MX25L256 BIOS ROM is a 256Mbit/32MB BIOS ROM. The ITE IT5701E is an embedded controller responsible for QFlash+ BIOS flashing capability.

The ITE IT8689E is the SuperIO controller and controls fans and other miscellaneous motherboard features. The ITE IT87952E is an embedded controller that handles stuff like RGB and sensor monitoring, it compliments the SuperIO.

We find some ASMedia ASM1480 PCI-E 3.0 switches that switch x4 between the top PCI-E x4 slot and the adjacent M.2 slot.