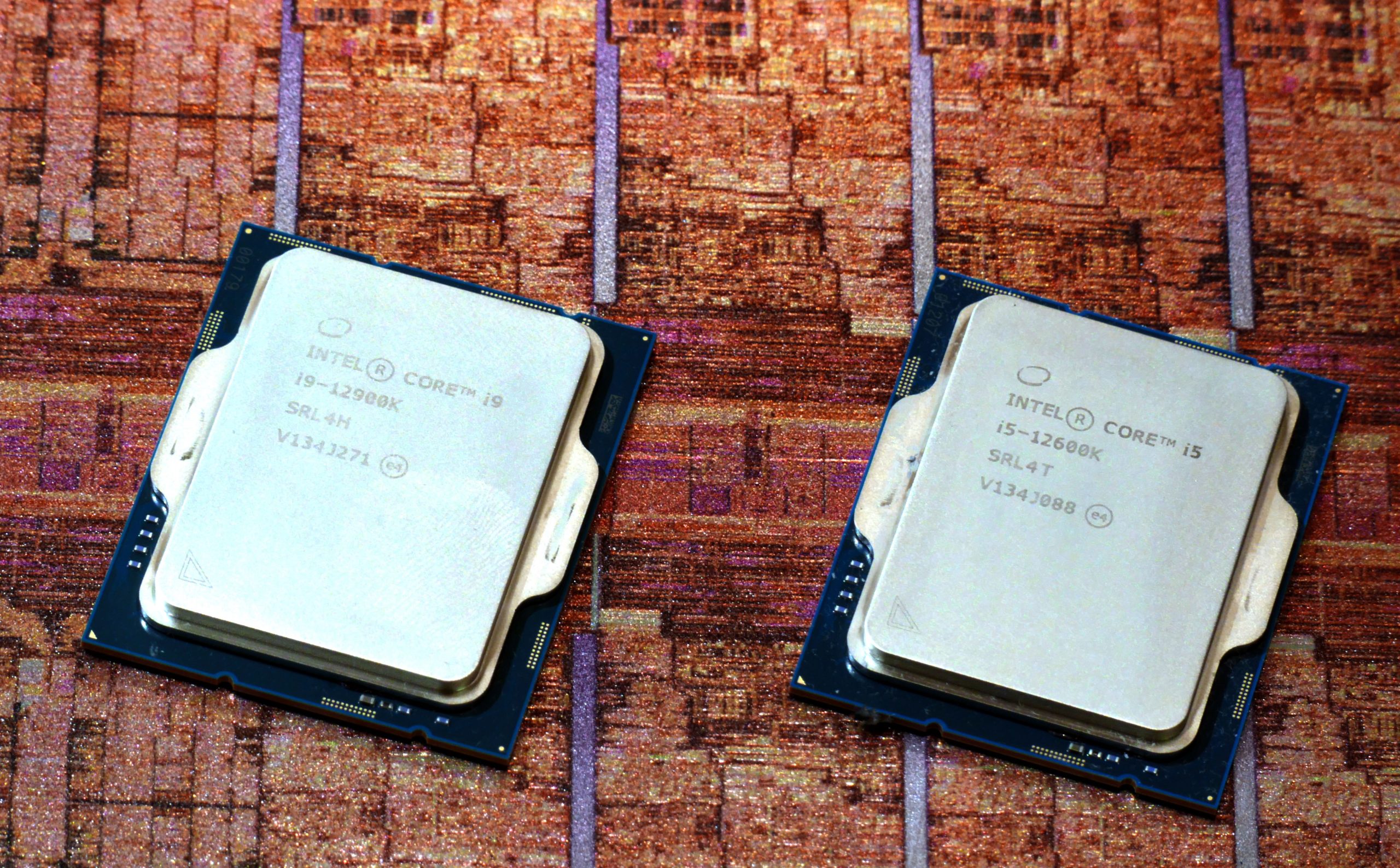 Intel’s Alder Lake processors get a run through our benchmark suite with the latest Windows 10 July updates. Alder Lake CPUs use a hybrid die with P-cores being the high-power high-performance processor cores while the E-cores are meant for power efficiency and background tasks. Combining both on a single die with a shared cache is meant to save power, but also to improve performance by offloading low-priority tasks to free up high performance cores for more intensive workloads. Without guidance the scheduling of tasks/threads to different types of cores would be very difficult, so Intel worked with Microsoft to optimize Windows 11 for these new CPUs. The scheduling is dependent on the OS and Intel’s Thread Director. According to Intel, Windows 11 has the full Thread Director version built into it, while Windows 10 has an “earlier version”. We did a dive into the changes Alder Lake brings to the table over previous 11th generation processors here if you are interested in learning more about these new CPUs, what P-cores and E-cores do, the cache hierarchy, and the overall design of the platform.

We have updated some of the benchmarks in our test suite, and CINEBENCH is one of them. The new Alder Lake 12th generation Core processors are taking the win in both single and multi-threaded results in relation to comparable products.

In wPrime the CPUs are performing as we expected, but since the load applied to each core is more uniform compared to CINEBENCH, the extra threads on the AMD processors help them more.

Here we see the 11th generation processors do well in the integer operations per second(IOPS) test compared to the 12th. The 11th (Cypress Cove) and 12th generation (Golden Cove on P-core) are both based on Sunny Cove microarchitecture, which increased integer performance over the previous five Skylake-based generations of processors. However, it looks like the operating system is confused about where to schedule the threads, perhaps scheduling some to the E-cores first instead of the P-cores.

We tossed out the older version of Blender Benchmark and welcomed the new version, 3.2.1. AMD processors have always dominated in Blender, but here we can see that Intel’s new processors are doing quite well.

ScienceMark is an older legacy benchmark that isn’t being updated. It gives a warning that it doesn’t recognize the memory architecture on many of our CPUs, and while it might not be the best for cross comparison between Intel and AMD, it is useful for comparison within company ranks.

Here we see the 12600K doing excellent while the 12600K isn’t able to get ahead of the 11600K. We can only assume it has to do with the higher latency of the DDR5 memory. Nevertheless, the results are very close.

Memory bandwidth is obviously higher on the DDR5 systems. These results are at 4800MHz DDR5 and 2666MHz DDR4.

Latency is where we expected it to be for DDR5.

While UNIGINE is a synthetic benchmark, it is a very popular game engine and shows us a sneak peak of how the new processors will do in real benchmarks. Here the 12th generation Intel Core processors are winning by a pretty large margin.

The 12th generation Alder Lake processors are still winning at 1080P resolution, which brings the GPU into play a bit more.

Here we see an actual game benchmark, and the Alder Lake CPUs are in the lead across the board.

Ashes of the Singularity: Escalation is a very processor involved game, and the results freaked us out a little bit. The game is very thread heavy and DRAM heavy, and these results look very similar to our DRAM bandwidth results.

In Rise of the Tomb Raider we see very strong results from both of the Alder Lake CPUs.

As we expected, with their unlocked power restrictions, both the 12900K and 12600K are consuming a lot of power. If the motherboard can handle it and the temperatures are reasonable enough, then these CPUs are let lose to do their job without many restrictions.

We saw the 12900K and the 12600K both dominate, even though the operating system (Windows 10) wasn’t fully optimized for them. However, strong results with Windows 10 are a great sign that many users wont need to update to Windows 11 to take advantage of the advancements in the new microprocessors. We still have a “Windows 11 with August updates” article, which will come out soon. As Intel promised these CPUs take the crown in gaming, at least for now. The cost of entry for the platform is a bit high. With the new DDR5 and PCI-E 5.0 protocols, motherboards and DDR5 memory end up being quite expensive compared to their PCI-E 4.0 and DDR4 predecessors you find with the 11th generation Intel processors. Either way, Intel’s 12th generation Core processors are the fastest gaming processors currently on the market, and the hybrid core design did well considering this is its first mainstream deployment.

(910)
$238.99 (as of February 1, 2023 16:29 GMT -05:00 - More infoProduct prices and availability are accurate as of the date/time indicated and are subject to change. Any price and availability information displayed on [relevant Amazon Site(s), as applicable] at the time of purchase will apply to the purchase of this product.)

(13375)
$248.00 (as of February 1, 2023 16:29 GMT -05:00 - More infoProduct prices and availability are accurate as of the date/time indicated and are subject to change. Any price and availability information displayed on [relevant Amazon Site(s), as applicable] at the time of purchase will apply to the purchase of this product.)

(156)
$599.97 (as of February 1, 2023 16:29 GMT -05:00 - More infoProduct prices and availability are accurate as of the date/time indicated and are subject to change. Any price and availability information displayed on [relevant Amazon Site(s), as applicable] at the time of purchase will apply to the purchase of this product.)