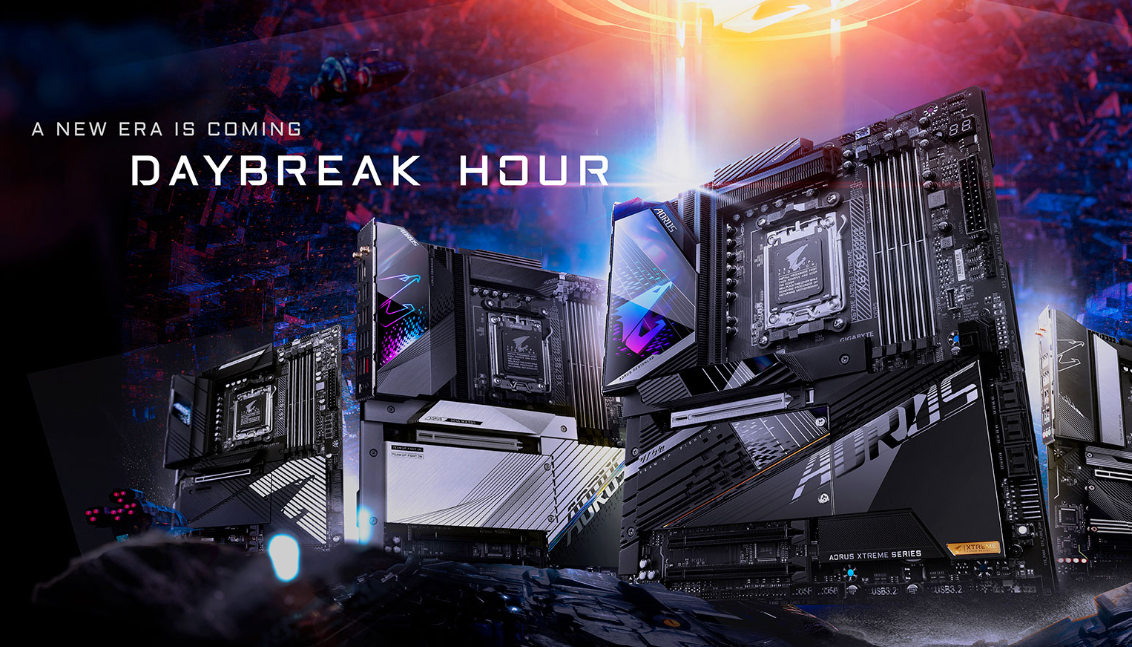 GIGABYTE is ready to launch its top tier X670E motherboards the X670E Aorus Xtreme and X670E Aorus Master. Let’s take a look at what GIGABYTE has to deliver by looking at slides recently presented at AMD’s Next Frontier of Ryzen Motherboards webinar.

GIGABYTE started out by detailing their powerful voltage regulator solution for the new AM5 platform. The AM5 platform has to natively (by default) be able to provide 170W of power for the new 7000-series Ryzen CPUs, so the VRM is very important. The top of the line motherboard will feature an 18+2+2(CPU+SOC+MISC) phase VRM. We find more details in the handy table below:

The Xtreme and Master use the Renesas RAA229628 20 phase PWM controller, which offers X+Y≤ 20 phases. The Xtreme is in a 18+2+2 phase configuration while the Master is using a twin configuration to get 16+2+2 power phases. Both the Xtreme and the Master models utilize the 105A Renesas RAA2201054 105A Smart Power Stages (SPS) for their CPU VCore power. On both models there are two phases for the SOC and two for the MISC; the ON Semiconductor NCP303160 SPS 60A for the SOC and the Renesas ISL99390 SPS 90A for the MISC. The MISC phases provide power for the integrated PCI-E devices in the CPU while the SOC phases provide power for the integrated GPU and memory controller. There are two other X670 motherboards listed with their VRM configurations.

GIGABYTE added extra support to the x16 PCI-E 5.0 slot for heavy GPUs, the new SMD Iron Claw features more anchors and is 20% wider and its predecessor.

The top M.2 slot actually supports the new M.2 25110 form factor, which is what next-generation M.2 drives are supposed to come out in.

The thermal solution for the top M.2 drive is quite hefty and 4cm tall. The VRM heatsink is also quite involved with Fin-Array III on the Xtreme on all of the CPU VRMs, while the Master has the fin array on the MOSFETs closest to the rear IO while the other part of the VRM has a solid heatsink. Both the Xtreme and the Master have 8-layer.

The M.2 heatsink has extra fins to cause turbulence that should help to transfer the heat from the heatsink to the air.

Here we can see that GIGABYTE has integrated both a PCI-E EZ-Latch Plus and an M.2 EZ-Latch Plus for easy installation and removal of GPUs and M.2 drives. The EZ-Latch Plus works with a button near the DRAM area of the PCB and actually releases your GPU from the locking mechanism of the PCI-E slot.

The Xtreme comes with an Aquantia AQC113C 10Gbit NBase-T controller and the Master and other X670 motherboards feature 2.5Gbit LAN. Both boards come with WIFI 6E cards and smart antenna.

The GIGABYTE X670E Aorus Xtreme features an 8-layer 2x copper low-loss PCB. It also features a single PCI-E 5.0 x16 slot, a PCI-E 4.0 x4 slot, and a PCI-E 3.0 x2 slot. The motherboard also features a whopping five PCI-E 5.0 x4 M.2 slots all on the motherboard. There is also a new feature GIGABYTE dubs “Multi-key” which is a programmable switch on the PCB that can be set in the BIOS to provide features including reset, RGB switch, Direct to BIOS, and Safe Mode. It is probably a reset button by default.

The GIGABYTE X670E Aorus Master features an 8-layer PCB with SMD DIMMs and PCI-E slot (same as Xtreme) for PCI-E signal integrity. The motherboard offers the same PCI-E layout as the Xtreme as well with a x16 PCI-E 5.0 slot, a x4 PCI-E 4.0 slot, and a x2 PCI-E 3.0 slot. The motherboard also offers four M.2 x4 slots; two are PCI-E 5.0 and two are PCI-E 4.0. The motherboard also features the Multi-key button that can be programmed to be a reset, RGB switch, direct to BIOS, or safe mode button. We wonder if it could also be programmed to clear CMOS, but that would mean it would clear its own functionality, perhaps indicating the clear CMOS worked.