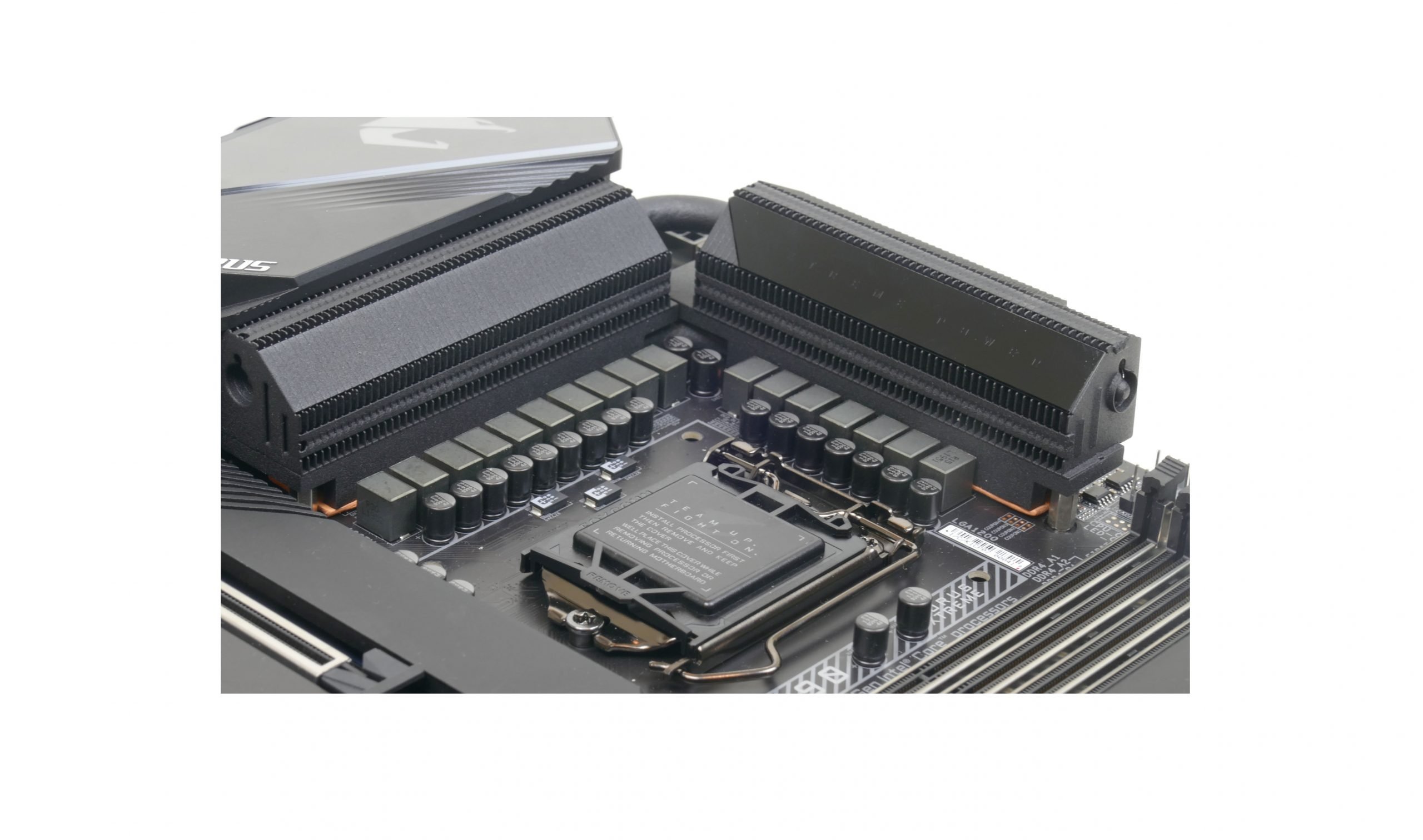 Today we are going to venture into the world of extremely high-end Z490 motherboards. We will specifically examine GIGABYTE’s Z490 Aorus Xtreme. Priced between $500-$700 depending on the condition and seller of the motherboard, the Xtreme model is the best of the best when it comes to GIGABYTE’s Z490 offerings. It’s loaded with features, many of them very high-end. What is more impressive are the engineering feats that GIGABYTE has put into this motherboard, both in terms of electrical and mechanical design. Let’s take a look.

Packaging is top notch. The motherboard, not featured here, sits in an anti-static foam container and is well protected. Under it are the boxes you see above, and each contains different types of accessories.

The motherboard is covered in a huge dark shield over most of the circuits. It is mostly brushed aluminum, which is a refreshing change from the plastic shields we typically see. It seems that all of the fan headers are hybrid PWM/DC mode headers, so they support control of both 4-pin PWM and 3-pin voltage mode fans. Five of them are situated at a right angle in the upper right corner, and two of them are positioned vertically at the top of the motherboard.

The PCI-E configuration is very straightforward. The two top slots are routed to the CPU at x16/x0 or x8/x8 and operated up to PCI-E 4.0 speeds depending on the CPU used. The bottom ports is PCI-E x4 PCI-E 3.0 routed to the PCH.

The M.2 slots on this motherboard support up to three M.2 drives at x4 each. The top port will operate off the PCH with a 10th generation CPU unless you put in an 11th generation CPU, which provides x4 PCI-E 4.0 from the CPU instead. The top slot will switch to the CPU through physical switches so you can get true PCI-E 4.0 and take full advantage of the new 11th generation technology. The middle M.2 slot shares two SATA6Gb/s ports through the PCH (the bottom two SATA ports).

From left to right we have a USB 2.0 breakout header, an addressable RGB LED header, a normal RGB header, a USB 3.0 internal header, and six SATA ports. You can also spot a small jumper to the far right that covers up the noise detection header.

We have two more RGB headers (addressable and RGB), a front panel breakout header a 24-pin power connector, and five hybrid fan headers. It is pretty neat that all these are right angled instead of vertical; the downside is that your case needs to have room to facilitate everything.

The USB USB 3.2 Gen 2 (10Gb/s) type-C internal header is vertical, I assume because right angle headers for this type of connector either don’t exist or are too pricey for even this motherboard.

We fin a dual BIOS switch and a single BIOS mode switch hidden under a rubber cover. The internal audio header is also hidden there along side a proprietary LED power plug (for conference shows).

At the top of the motherboard we find some voltage read points, but they are in an awkward tight position. We also find our POST code display, power and reset buttons, and an OC ignition button which can power the motherboard’s LEDs and other functions such as fans when the system is off so you can test out water cooling or do subzero overclocking.

The heatsinks on this motherboard are great. I love the fact that the shields are mostly metal, and the CPU heatsink is top notch. Not only does it use direct-touch copper heatpipes in the heatsink but it features real fins and high thermal conductivity thermal pads for the VRMs.

The motherboard looks great without the heatsinks, and while you might not run it like this, it is always nice to see what lies beneath.

Moving to the VRM we have a hefty 16+1+1+1 phase VRM. It is controlled mainly by an Intersil digital PWM controller that supports up to three outputs, in this case 8+1+1. The PWM controller is capable of X+Y+Z up to a total of 12 PWM channels separated between three rails. The digital PWM, an Intersil ISL69269 is pictured below in more detail. The iGPU phase is the bottommost phase, and you can tell it is different by the inductor and you can look on the underside to see where the switching node meets the copper plane for the iGPU power rail. The VCCSA and VCCIO are located under the topmost M.2 bottom shield, so you would need to remove that shield to even see them.

Apart from the powerful new PWM controller we find phases capable of up to 90A output. They are made by Intersil/Rensas (who seems to have bought up a lot of power IP). The ISL99390 are SmartPowerStages (SPS), and are a pricey addition to the motherboard. While they don’t have an exposed metal topside, the cooling mechanism on this motherboard should handle them just fine.

The memory VRM is made up of a Richtek RT8120D, which is a single phase PWM controller with integrated driver, and outputs to a two-lowside/one-highside powerstage configuration. It should be more than enough for DDR4.

While the PWM outputs 8 PWM channels, the VRM itself is in a 16-phase configuration. The Intersil ISL6617 are phase doublers with a very basic and quick design. Eight of them each take in one PWM channel and output two, and they also get feedback on the current output of each phase and balance them out to improve thermals and performance.

GIGABYTE didn’t hold back on the audio section of this motherboard. For starters, there is a Realtek ALC1220 on this motherboard to convert the digital audio to analog, but it doesn’t stop there. We also find an ES9018K2M DAC to improve audio output, separate linear regulators to regulate each separate channel, and a Texas Instruments OP1622 for the main rear output. However, GIGABYTE went above the norm by adding in a solid state oscillator as well as a NEC relay that will make a click every time you boot the system to avoid the pop sound during bootup. I forgot to mention the WIMA film capacitors and the dedicated power rail from the Texas Instruments boost converter, which provide the ecosystem to take full advantage of the audio system. The kicker is that the front audio outputs have their own ALC1220….

On the rear of the motherboard you will find another Realtek ALC1220, which is responsible mainly for front panel audio output from the motherboard. It utilizes a lot of the same components as the main audio system but it has its own dedicated system consisting of an ESS Saber ES9128P DAC. There is also an external DAC included in the system I will cover in a bit.

Here we have an Intel i225 NIC, and it seams to be a standalone NIC with its own BIOS ROM.

Here we have some hidden PCI-E 4.0 re-drivers under one of the M.2 bottom shields, but also four Pericom PCI-E 4.0 quick switches. They allow the PCI-E 4.0 from future CPUs to be split between the top and middle port, but also ensure signal integrity while doing so. There is also an IDT clock generator for PCI-E 4.0 compatibility. The motherboard and easily switch between 10th generation and 11th generation processors, so they support both PCI-E 3.0 and 4.0.

Here we have a Pericom PI3EQX re-driver for USB 3.2 Gen 2 (10Gb/s), and a Realtek RT5441 type-C controller for the internal USB type-C internal header.

Here we find a Realtek USB hub, and two re-drivers that improve signaling quality for PCI-E 4.0.

Here we have two 256 Mbit BIOS ROMs, so they are capable of 32MB BIOS ROM storage. That is important because future CPUs will require a larger BIOS ROM space, and this motherboard supplies two of these expensive chips.

Here is the SuperIO, the IT8688E, and while it is supplemented by other controllers it is still responsible for the system in general.

Here we have three PI3EQX re-drivers for USB 3.2 Gen 2 (10Gb/s), there are many others on this motherboard to ensure all the ports coming off the PCH meet normal standards. We can also spot a Gtec GL850S, which is a USB 2.0 hub for the rear IO.

Here we find another hub for USB 2.0 as well as a secondary ITE controller. It is an MCU dedicated to RGB LED support.

SMD DRAM DIMMs are a beautiful sight, and in this case it is rare. I don’t know of any other Z490 motherboard with a low impedance PCB along with 2oz copper and SMD DIMMs. It is no cheap feat to provide this feature, but it should greatly reduce DRAM noise, which should increase clock margins.

Our last chip is the level shifter, this provides the HDMI port on the rear IO.

Here is the breakdown of what is in the external type-C to RCA DAC included with the motherboard.