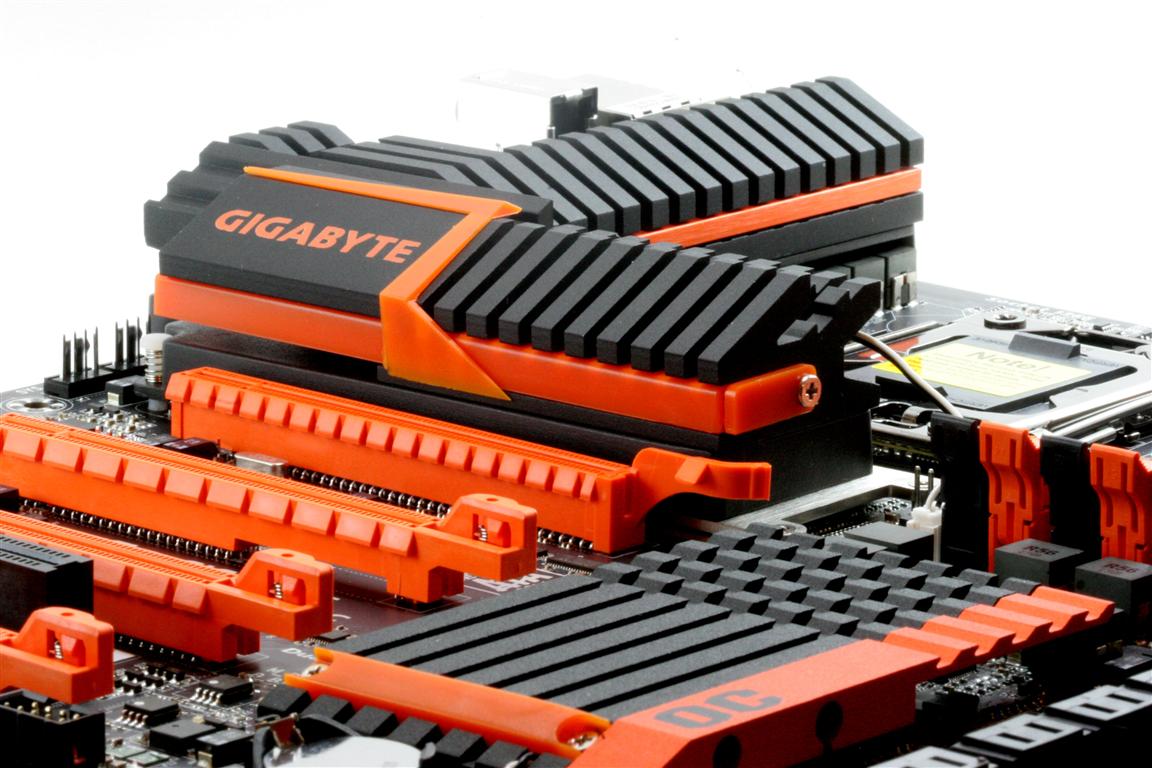 Recently, while roaming GIGABYTE’s official Facebook page, I saw they shared one of my glamour shots used in an older review of the iconic X58A-OC. I decided to upload a set of my older pictures, which I think are the best I ever took of the motherboard so we can see where GIGABYTE first started its powerful and groundbreaking line of high-performance competitive overclocking motherboards!

Here is another glamour shot of the VRM and IOH area of the motherboard. The IOH was the northbridge, it basically handled PCI-E support and in the far past it also was where the memory controller was integrated. On newer platforms those are all integrated into the CPU’s System Agent.

The ICH heatsink cools the south bridge, and if you look at it in a certain direction it looks like a waving flag!

These buttons for on the fly multiplier and BCLK support were a new addition, and the gear button allowed you to fine tune the increments that you could increase the base clock speed by.

The X58 chipset was Intel’s high-end desktop chipset, so you did get a lot of PCI-E lanes compared to current Intel main stream desktop platforms.

The important thing in this picture is not the Clear CMOS button but rather those three DIP switches. The X58A-OC offered users the ability to increase and fine tune the switching frequency of the voltage regulator module through different switch combinations! So far this is the only time I have seen this done.

GIGABYTE wanted potential buyers to realize that this was an extreme overclocking high-end desktop motherboard, and as such they basically cut the rear IO in half. We aren’t totally sure why they included audio.

Here we see the motherboard without its heatsinks.

Here are the motherboard’s heatsinks, but for most users the top heatsink wouldn’t be used as most people used this motherboard for setting world records with cryogenics whose containers took up too much space.

Here we have a nice shot of the VRM on the motherboard. It was a very strong 12 phase VCore VRM and it used integrated power stages, which were relatively new for the era.

The heatsinks had LEDs built into them.

The X58A-OC was one of the first boards, if not the first, to feature OC-PEG. OC-PEG is GIGABYTE’s term for extra PCI-E power ports using SATA power instead of the traditional MOLEX connector.

If you know me you know I like the chips, and while I was going over the X58A-OC I found this chip. It says “SEXY” on it, which I thought was awesome, because the board is sexy, but it is probably a coincidental batch number for the part.

My first sub-zero go with the X58A-OC was with dry ice.

Not a bad score for dry ice, but I wanted more.

Here we are at -170C with Liquid Nitrogen.

I was new to LN2 at this point, so I opted to take all precautions, later on you learn you really need very little other than to keep fans blowing. However, at that point in time I was using di-electric grease in the socket to ensure condensation couldn’t form.

While this picture is not a “glamour shot” it shows how intensive the processes of extreme overclocking is, and how much fun you can have with a motherboard like the X58A-OC!