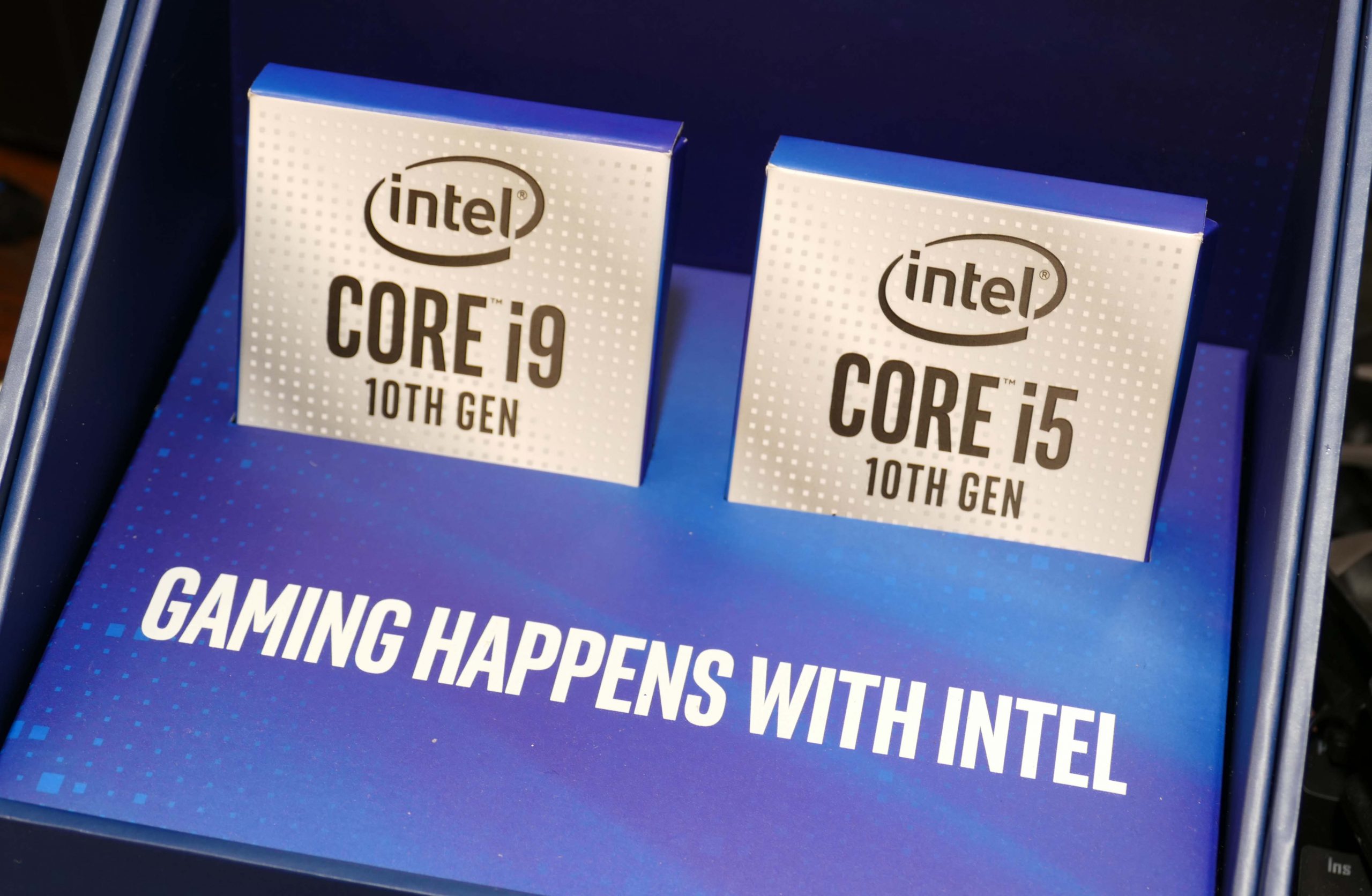 A little while back we gave you a preview of what was to come with Intel’s 10th generation core processors, and today we will show you what these processors have in store for users world wide who want the best mainstream enthusiast CPU Intel has to offer. Intel typically

If you buy a retail version of the CPU your box will not look like this glamour media packaging Intel supplied reviewers. Instead you will get a typical Intel boxed processor, and since these are high-end K-SKU processors there will be no cooler. You will get a CPU, case badge sticker, and a warranty manual. The 10900K can boost a few cores to 5.3GHz while the 10600K can go to 4.8GHz, although all core clocks are a bit lower than those boosts (4.8GHz on the 10900K and 4.5GHz on the 10600K). Both CPUs have 125W TDPs. The 10900K features 20MB of cache while the 10600K features 12MB. The cache amount is related to the core count, so at 10 cores the 10900K has a lot more cache than the 6 core 10600K. The 10900K will chime in around $488 and the 10600K will cost around $262, but like always, supply and demand will ultimately determine final retail price and availability.

The CPUs themselves look identical to their LGA1151 counterparts, but there is one difference. While previous Intel mainstream CPUs have used the LGA1151 CPU socket, the new CPUs usher in the LGA1200 CPU socket, so you will need a 400-series motherboard to run the new CPUs. The new K-SKUs we are looking at today also feature better thermal performance due to a lower Z-height (vertical length) die so heat and can move more readily to the solder thermal interface material, then into the copper integrated heatspreader, and then into your cooler’s cold plate through your thermal paste.

Here we will look at how the 10900K stacks up against the competition.

The 10900K is a very strong CPU when it comes to CINEBENCH. In both multicore rendering and single core rendering the CPU wipes the floor with the competition with a combination of higher core count and higher core boost frequency. The 10600K is holding on, but its lower price helps justify its lower performance.

in wPrime we see the same results, with the higher core count CPUs doing much better. The 10900K leads the pack, and doesn’t seem like it is having a hard time doing so.

Once again the 10600K isn’t keeping up, but it is doing its best to keep up. The lower price tag of the CPU justifies this performance. On the other end of the spectrum we see the 10900K, and we can see that it does justify its higher price as it leads in the charts.

These AIDA64 FPU and IOPS tests show how strong Intel is compared to AMD in these use case scenarios, with both new Intel CPUs doing very well.

Memory performance on all Intel CPUs is quite similar, we didn’t expect much of a difference considering we ran them all at the same memory frequency.

Latency on the memory is consistent, and the increased cache and frequency helps the higher core count Intel CPUs decrease their latency. The 10600K is standing on its two legs here as well.

ScienceMark is a legacy benchmark, and while that isn’t the best indicator of current software performance on a platform, a lot of people do use software that features legacy code. In this case, AMD does pretty well with their newer CPUs, but Intel is still sticking in there.

SuperPI calculates PI to a certain number of digits and in this case it is 32 million digits. The Intel CPUs, with their lower latency and higher single core frequency dominate this benchmark. Both the 10900K and 10600K do exceptionally well.

We see that Intel CPUs are doing pretty well in Handbrake. The 720P test is a conversion of a 720P video between different video formats, while the 1080P is a reduction of a 4K video to a YouTube quality 1080P video.

We see some mixed results in FireStrike, with the KS version of the 9900K doing quite well. However, the GPU performance on the 10900K is very strong.

The Intel CPUs are doing very well in CloudGate, and we see that the 10900K has the highest Physx score, which is a measure of CPU performance. The 9900KS is still in the lead here.

In UNIGINE 720P we see the 10900K dominate, which indicates strong real world gaming performance. The 10600K does okay, but its AMD competitors are doing a bit better. Pricing will determine which is a better value buy.

In GTA:V we see that the 10900K do the best and the 10600K edge out comparable and even higher core count AMD CPUs, indicating better real world gaming performance. These CPUs are marketed as being some of the best gaming CPUs and that is what we see here.

Ashes of the Singularity: Escalation shows is that the 10600K is a pretty strong gaming CPU; it edges out both AMD CPUs. The 10900K does pretty good compared to the other CPUs, although it does seem that the 9900KS has a bit of an edge.

In Rise of the Tomb Raider the 10900K leads the charts, while the 10600K beats out both AMD CPUs. These results are not what we expected. It is a pleasant surprise to see that the new generation of CPUs are doing better in gaming as Intel promised.

In Resident Evil 6 benchmarks the new Intel CPUs both dominate. Not only do they beat out both AMD CPUs in the charts, they also both beat out the 9900K and the 9900KS. Here we see how these new CPUs are meant to perform in games.

As expected the 10900K uses more power than its 125W TDP number. At almost 200W power draw the CPU is pulling a lot of power.

Overclocking wasn’t too difficult on the 10900K. The new Thermal Velocity Boost allows the CPU to go up to 5.3GHz on a core or two if thermal headroom is present, so I figured I should be able to get to 5.3GHz on all cores, and I wasn’t wrong. The new CPU can do it, and it did it with ease. Although CINEBENCH isn’t the best stability test, it does show the potential of the CPU if we took the time and effort to optimize it. We aren’t promising every CPU can do this, as taking 10 cores that high in frequency can be a daunting task.

We believe that the i9-10900K and even the more affordable i5-10600K offer excellent gaming performance. Considering gaming is Intel’s main focus for these CPUs we are impressed with the real world performance in most games rather than synthetic gaming performance in some graphics benchmarks. The increased core count on the 10900K is a nice addition to Intel’s product line, as is the more affordable 10600K. We also were impressed with the slightly lower temperatures with the improved thermal performance engineering. Overall, if you want a polished CPU with excellent core count and excellent real world gaming performance the 10900K will be your go to, and if you want to save more than a few dollars but still want great gaming then the 10600K is your go to processor.

(583)
$182.99 (as of February 1, 2023 16:29 GMT -05:00 - More infoProduct prices and availability are accurate as of the date/time indicated and are subject to change. Any price and availability information displayed on [relevant Amazon Site(s), as applicable] at the time of purchase will apply to the purchase of this product.)

(644)
$164.00 (as of February 1, 2023 16:29 GMT -05:00 - More infoProduct prices and availability are accurate as of the date/time indicated and are subject to change. Any price and availability information displayed on [relevant Amazon Site(s), as applicable] at the time of purchase will apply to the purchase of this product.)

(1014)
$416.53 (as of February 1, 2023 16:29 GMT -05:00 - More infoProduct prices and availability are accurate as of the date/time indicated and are subject to change. Any price and availability information displayed on [relevant Amazon Site(s), as applicable] at the time of purchase will apply to the purchase of this product.)

(252)
$100.91 (as of February 1, 2023 16:29 GMT -05:00 - More infoProduct prices and availability are accurate as of the date/time indicated and are subject to change. Any price and availability information displayed on [relevant Amazon Site(s), as applicable] at the time of purchase will apply to the purchase of this product.)