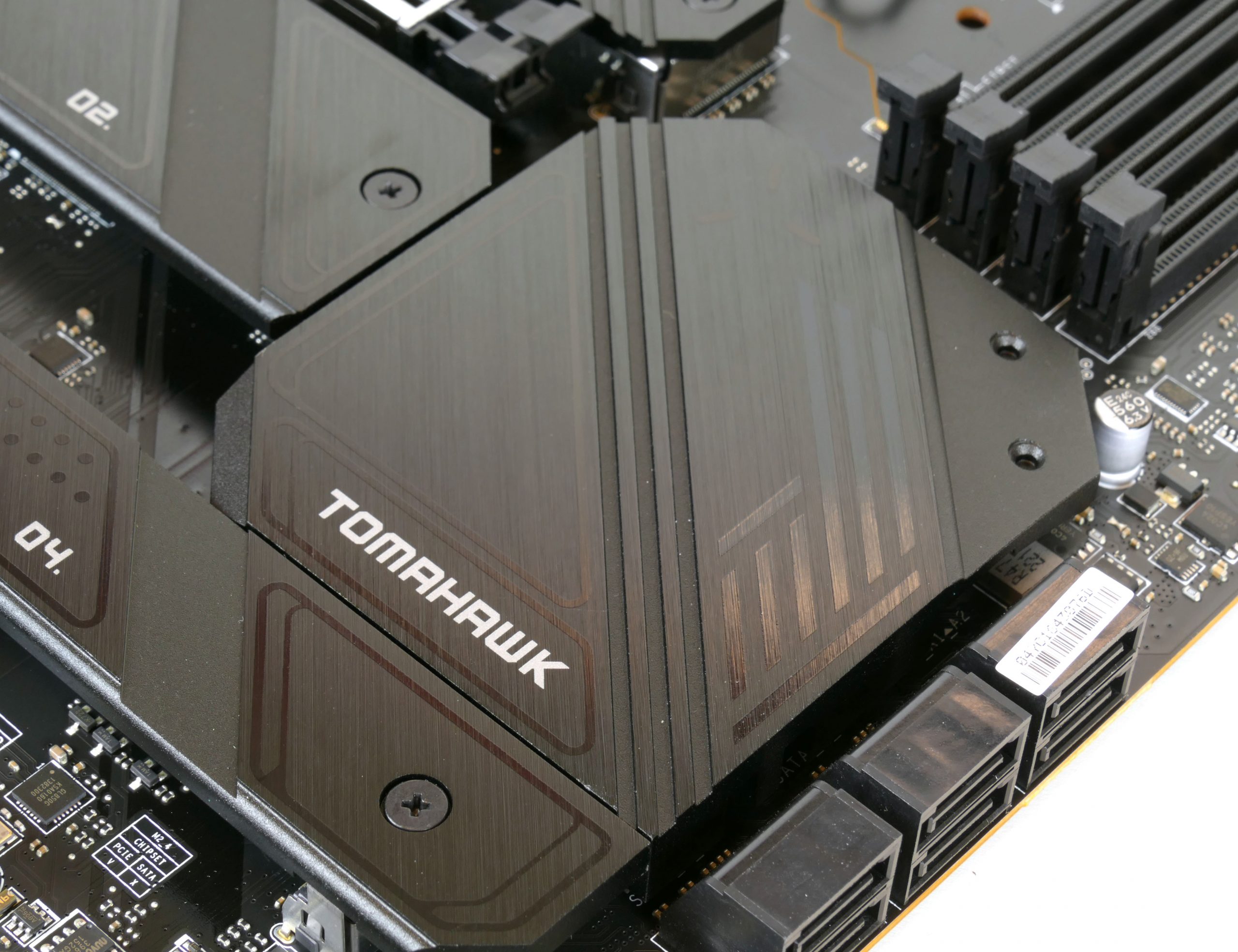 One feature unique to the LGA1700 CPUs is support for either DDR4 or DDR5 memory depending on the motherboard. Today we are going to detail our first LGA1700 Z790 chipset DDR4 motherboard.

The Z790 TOMAHAWK WIFI DDR4 is one of MSI’s latest motherboards for Intel’s Z790 chipset, and they have kept the box pretty simple, yet familiar to the Tomahawk brand. MSI’s two major selling points for the motherboard include DDR4 support and WIFI 6E, both of which are prominently displayed in the product name.

The brushed aluminum finish of the heatsinks is a nice touch and blends nicely into the background with the PCB and the decorative rivet holes. The motherboard is jet black, and looks like it is meant to fade into the background of your build. Fan control is a bit more interesting here. Let’s start with the fan header current ratings; the CPU fan header is rated up to 2A (circled in red), the pump header is rated for up to 3A (circled in red), and the six system fan headers are rated up to 1A (circled in green). The CPU fan header can detect which operational mode it should be in, the pump header is by default in PWM mode, and the system fan headers are in DC mode by default. All the headers can support both types of fan modes.

The back of this motherboard is actually kind of interesting. For starters, there are eight ISL6617 phase doublers, so MSI put a bit more effort into this motherboard compared to others in this price range that forgo the use of doublers. There is also one other peculiar feature; there is a hole in the center of the CPU socket. This hole in this position has traditionally been used solely on liquid nitrogen overclocking capable motherboards and allows for a thermocouple to go under the CPU socket. There could be two reasons for this; MSI just used a PCB design from another motherboard designed for extreme overclocking or they decided to offer up this board to those who might want to break DDR4 Raptor Lake records with liquid nitrogen. The motherboard also features a few headers on the motherboard that are omitted from the manual, headers that are typically used for internal debugging but also useful for those in “the know”.

The motherboard features four x4 PCI-E 4.0 M.2 slots. The M.2 slot right between the CPU and the first PCI-E slot is routed to the CPU. The remaining three slots are routed to the chipset. The M.2 slot closest to the audio area (M2_3) supports SATA as well as x4 PCI-E 4.0 NVMe, but if you use a SATA drive in this M.2 slot, it will disable the single vertical SATA port.

There are six right angled SATA6Gb/s ports on this motherboard (there is a 7th, but isn’t right angled nor pictured). The four left ports support RAID through the chipset, the two rightmost SATA ports are through an ASMedia controller and do not support RAID.

In the top right corner of the motherboard we find two addressable RGB LED version 2 headers and some diagnostic boot LEDs.

In the bottom right corner of the motherboard we find our front panel headers, that single SATA6Gb/s port that shares its bandwidth with the M2_3 slot, a clear CMOS header, two USB 2.0 headers, and a safe boot header, which was a nice surprise. The front panel headers are also located here.

Here, from what the manual says, we have an RGB LED header, then another addressable RGB LED V2 header, a Thunderbolt AIC header, and a chassis intrusion header. There is also a JDASH header that is on the motherboard further up near the PCI-E x16 slot. What is not in the manual are the JDP_1 header, JBD1, and JT1 headers. We are not a 100% on their functionality, but according to a user on Reddit, the JT1 is for CPU voltage and the JBD1 is some debug header, we don’t recommend you do anything with them. There is also a JPWRLED1 header here for like powering the board for RGB display purposes and there is also an SMBus header near the CPU fan header, but we don’t recommend you use them unless MSI gives you guidance.

The motherboard has heatsinks over all the VRMs, and it uses 7W/mK thermal pads on the CPU powerstages and inductors. The M.2 drives slots also all have heatsinks.

The motherboard reveals a fair amount of hardware with the heatsinks removed.

The CPU voltage regulator module (VRM) on the motherboard is a 16+1+1 phase for the CPU+iGPU+AUX rails. MSI calls this a “Duet Rail Power System” (DRPS) VRM, which seems to indicate that the phases are doubled through the use of a doubler IC.

The PWM controller here is from Renesas, the RAA RA229132, which is a digital PWM outputting 8+1 phases in this case. Each of the 16 CPU power stages is an Renesas/Intersil ISL99390 Smart Power Stage (SPS) rated at 90A.

Each of the eight PWM phases from the main controller route to an Intersil ISL6617A phase doubler, and then it produces two PWM channels for two 90A SPS for a total of 16 CPU core power stages.

The VCC GT uses a single phase also hooked up to the PWM controller, a 75A RAA22075.

Here we have a Monolithic Power Systems (MPS) MP2940A PWM controller and a 70A MP87670 for the AUX rail that feeds very important secondary CPU voltage rails.

Memory power comes from a single phase VRM consisting of a Richtek “QZ=9F” RT8125 PWM with integrated driver. By the way, the product code is QZ, the 9F stands for the year and month. The power stage consists of some ON Semiconductor “4C024” and “4C029” PowerPAKs.

We were surprised to find a Realtek ALC4080, complete with audio PCB division and some audio grade capacitors.

The USB section of these motherboards has become more fun to dissect than the VRMs. The IT8851 is the typical type-C PD controller we see for the 20Gb/s USB 3.2 Gen2x2 ports. The big Genesys Logic GL3523, and I say big because later we will see its lesser twin, is a USB 3.2 Gen1 (5Gb/s) hub for the rear USB 3.0 ports (blue). Then we have an ASMedia ASM1543 type-C controller chip for the 10Gb/s type-C port on the rear IO. One of the two PI3EQX1004 on the motherboard (the other you can see further below) re-drive lanes for the 10Gb/s USB 3.2 Gen2 ports on the rear IO (red).

The IT66318 we see above is an HDMI retiming buffer for the rear HDMI port.

Here we see the second PI3EQX1004 to redrive the remaining USB 3.3 Gen2 (10Gb/s) ports on the rear IO (red). Oddly enough, there is a Texas Instruments TUSB1146 series chip that is supposed to combine DisplayPort with USB for a type-C alternate mode port, but it seems that here it is helping get better and higher resolution DisplayPort 1.4 support up to 8K.

This is a Genesys Logic USB re-driver, and it is most likely either re-driving the single port used for the BIOS flash button, a single USB 3.0 ports for the Genesys hub on the rear IO, or maybe even to that Texas Instruments alternate mode chip above.

There is a PI3EQX1002 right below the chip above on the rear of the PCB (not pictured), and it re-drives a single USB 3.2 Gen2 (probably the type-C). The Pericom (now Diodes) PI3EQX2004 re-drives 20Gb/s USB type-C port bandwidth on the rear IO.

Here we can see an ASM1543 type-C controller chip and a Pericom PI3EQX2004 re-driver for the 10Gb/s type-C internal header.

Here is the mighty Nuvoton NCT6687D SuperIO controller that handles fan control and the like.

The nuvoton ARM-based microcontroller chip here is responsible for RGB LED control on the motherboard (three addressable V2 ports and one normal RGB).

Here we have our Fintek 502AN chip used on all MSI motherboards for BIOS flashing.

FInally, we will end this part of the review with our trusted ASMedia 1061, which provides SATA6Gb/s for the top two (closest to the 24 pin motherboard power connector) SATA connectors. It does not support RAID functionality.

MSI has once again done a great job of incorporating the proper hardware to get the job done. Whether it be the hardware to get 8K DisplayPort output or the 90A 16 phase CPU VRM, we think this motherboard’s hardware is solid, so we will approve of its hardware.