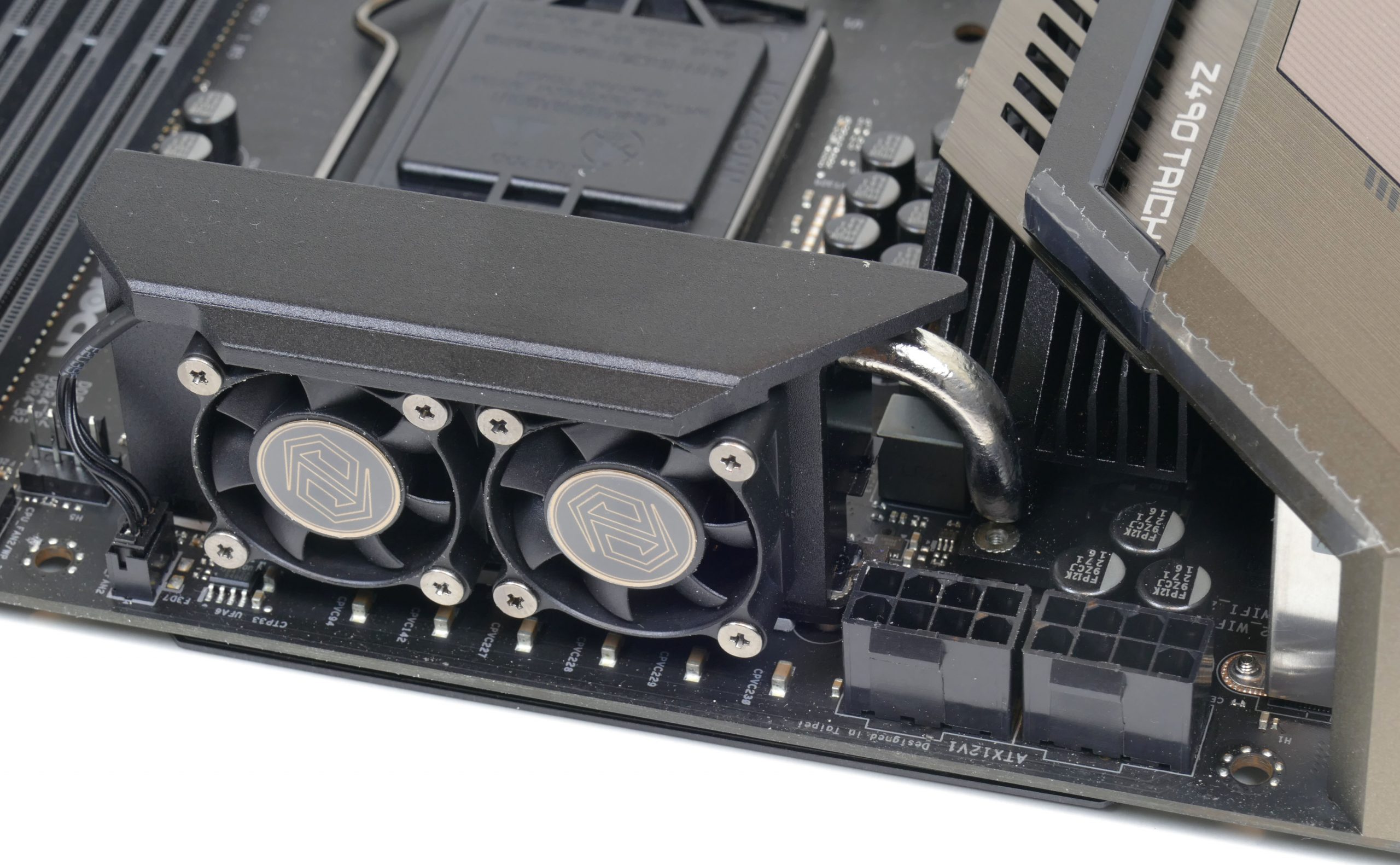 Today we are going to take a look at the build and brawn of the Z490 Taichi. The ASRock Taichi series motherboards have typically been enthusiast motherboards with straightforward features, but this particular chipset series has a lot of interesting capabilities. Let’s take a look!

The box is typical of the recent Taichi series motherboards from ASRock.

The picture on ASRocks website and the pictures I have taken must have been taken in different light. There is a gold tint to the heatsink sections that look more silver above, but we use direct lighting which could change the hue compared to the way ASRock takes their pictures. I would venture that inside a case it would look more gold. The shields and everything are high quality and look good. The motherboard has a relatively high number of fan headers with quite good capabilities. All the fan headers offer PWM and DC mode control through the UEFI and through Windows. The CPU fan header is circled in read, it offers up to 1A. Right next to it is a header circled in yellow, it is a CPU/WP header and it offers up to 3A of current. Then there are six chassis/WP headers that offer up to 2A each. It is an impressive setup.

The heatsinks are beefy on the VRMs and feature two tiny fans that are used to cool the heatsinks to dissipate heat. The motherboard also features two 8-pin power connectors for a total of 600W.

WE find two USB 3.0 (5Gb/s) ports, one is right angled. There is also an RGB LED header behind them. There is also a USB 3.1 (10Gb/s) type-C internal connector on the motherboard.

We find a POST code display, two USB 2.0 internal ports, a TPM header, power button, reset button, and front panel connectors in the lower right corner of the board.

We find more RGB headers at the bottom of the motherboard, both addressable and normal RGB headers. There is also a Thunderbolt 3 GPIO header and front panel audio header.

The top and middle slots operate at x16/x0 or x8/x8. While it isn’t prominently advertised, they do have the proper hardware to support PCI-E 4.0 with future CPUs. The bottom PCI-E x4 slot is x4 routed to the PCH, and the two x1 slots are x1 to the PCH. There are four M.2 slots, two of them support SATA ports and share lanes with four of the SATA6Gb/s slots from the PCH. There are two extra SATA6Gb/s ports from an ASMedia controller. The bottommost M.2 slot, and two of the SATA6Gb/s slots share bandwidth with the USB 3.2 (20Gb/s) type-C port on the rear IO. We also have one more M.2 slot, called M2_4, and it only works at PCI-E 4.0 with a PCI-E 4.0 compatible CPU, somehow the manual also says it supports SATA6Gb/s drives too.

The CPU VRM heatsink is separate from the rest of the shields and heatsinks and feature two fans to cool things down if they get too hot. The rear motherboard shield features two large thermal pads to cool down the back of the PCB.

Now we can get into the nitty gritty with the motherboard taken apart.

Here we have the VRM. It is configured in a 12+2 phase configuration and uses real phase doublers with current balancing to produce a pretty efficient VRM. We noticed that the VRM heatsinks also cool down the inductors, which do get pretty warm, to offer better transient performance and current delivery.

The PWM controller is an Intersil ISL69269, it outputs 6 PWM phases to six doublers and results in 12 powerstages that work like a 12 phase VRM. The VIshay SiC654 are used as integrated powerstages and offer up to 50A of current each, so up to 600A of current just for the cores maximum. The iGPU phases get two PWM channels. The PWM is a digital PWM, so performance should be quite good and it should have some configuration possibilities.

These are the Intersil ISL6617 PWM phase doublers, there are six of them on the rear of the PCB used for the CPU VCore VRM.

A UPI Semiconductor UP1674P is used to control two phases for the memory VRM. The memory VRM powerstages are made up by two SinoPower SM7341EH dual N-channel MOSFETs, they each have a high-side and a low-side MOSFET inside. They can each handle up to 24A, which is much more than is required.

The audio section has a physical divide between the analog audio signals and the digital audio signals coming from the PCH to the ALC1220 chip located on the motherboard. ASRock also utilizes an ESS SABRE9218 DAC, which offers up to 130dB SNR on the front panel header. There are also also features like electrolytic audio capacitors and WIMA film capacitors.

The tried and true i219v is present on the motherboard, it is a PHJY device that compliments the MAC built into the PCH to provide 1Gbit Intel LAN.

The Z490 Taichi features an ASMedia ASM3242, and that controller is how they get that single USB 3.2 2×2 (20Gb/s) type-C connector, and ASRock adds a USB re-driver to improve USB signal quality.

In the lower right corner of this motherboard we find a chip labeled BIOS. The chip is in charge of the BIOS Flashback capabilities. The larger nuvoTon chip is the NCT5585D is responsible for extra SuperIO capabilities and possibility some RGB LED support. We then find a microcontroller, the nuvoTon NUC121Z, which is in charge of addressable and possibility normal RGB LED control.

Here we find not only PCI-E 4.0 quick switches, but also redrivers. We have four Pericom PI3DBS, which can switch x8 PCI-E 4.0 between the first and second slots. Then we have four Pericom PI3EQX16, which are capable of redriving two PCI-E 4.0 lanes each to ensure signal integrity. Not all motherboards feature these chips, but they are essential for PCI-E 4.0 support from future CPUs.

We find some basic Texas Instruments quick switches connected to a lot of the SATA6Gb/s ports. A lot of the SATA ports share lanes with M.2 slots and also the rear USB 3.2 2×2 controller. We then find an ASMedia ASM1074 used to expand one USB 3.0 port to four to support both USB 3.0 internal headers. We also find a Pericom PI3EQX re-driver used to improve signal quality for the type-C internal connector.

To expand SATA6Gb/s we find an ASMedia ASM1061 controller. The controller provides two extra SATA6Gb/s ports, located below the other six.

The main SuperIO controller is the NCT6796D, which controls fans, monitors the system, and does things like provide PS/2.

Overall we were quite impressed with the hardware on this motherboard. We like the VRM very much, but what really impressed us is the feature count. For starters, ASRock’s approach to PCI-E 4.0 is more unique than we have seen, with a separate fourth M.2 slot just to be used with next generation CPUs. We also have USB 3.2 2×2 (20Gb/s), 2.5Gbit LAN, and a lot of USB internal and rear IO connectors. The aesthetics of the motherboard are also quite pleasing. Overall, the Z490 Taichi from ASRock once again fulfils the legacy of the product line and would make its predecessors proud.