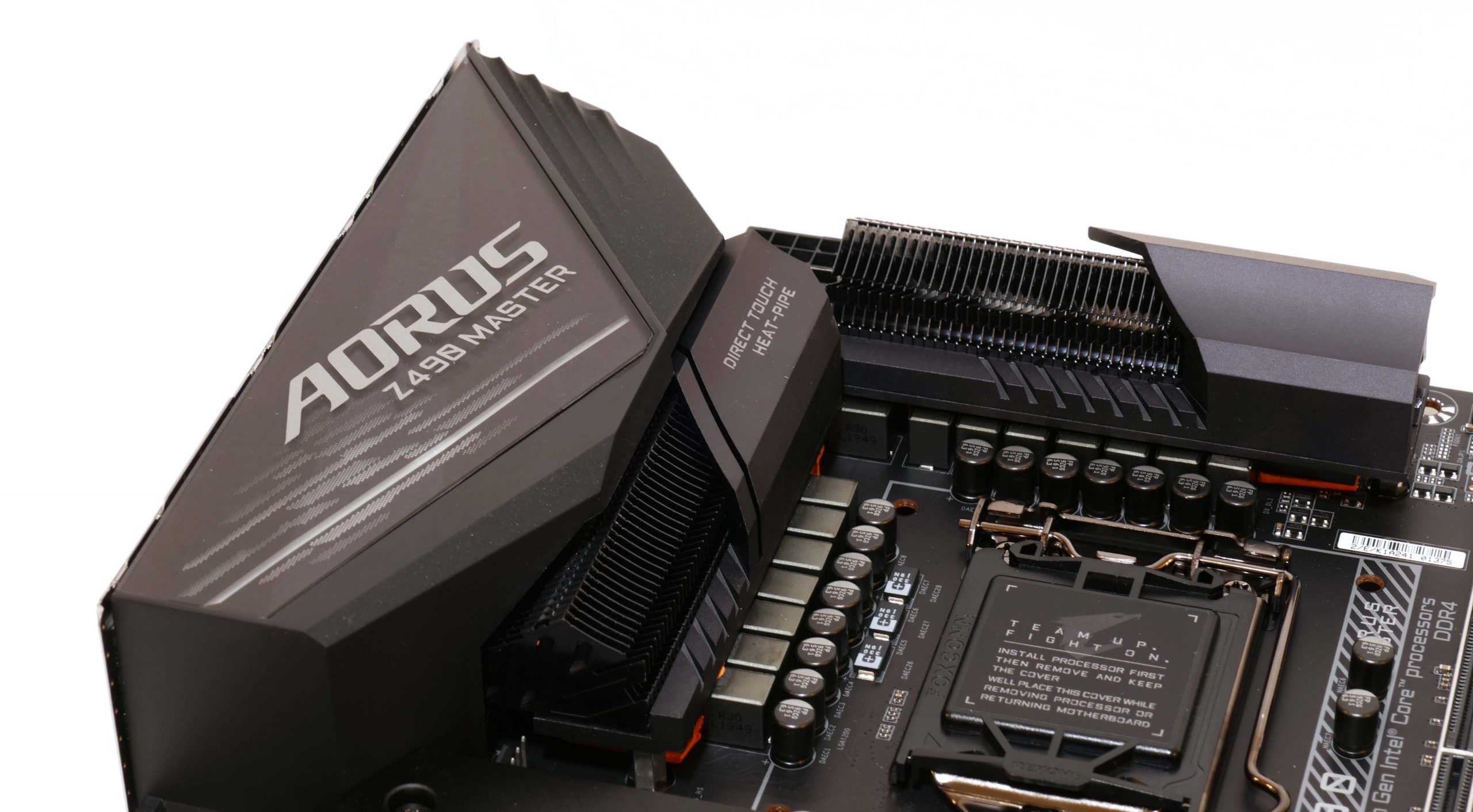 Today we will take a look at the Z490 Aorus Master. It is a formidable motherboard for anyone looking for a great, tough, high-end motherboard for their 10th and future 11th generation Intel processors. Our giveaway of this motherboard can be found here!

The box is very typical of Aorus products, not too much to see, but it is enough to protect what is inside.

The packaging inside is quite good. It is more on the side of high-end motherboards and features anti-static foam to protect the motherboard from damage during shipment.

Accessories are plenty. We have four SATA 6G cables, two thermometer cables to feed into the motherboard sensors, and RGB extension cable, a WIFI antenna, a microphone for fan audio, and of course stickers and manual.

The motherboard has a very neutral aesthetic appeal, with a nice black and gunmetal color theme. Most of the motherboard’s shields are actually made of actual metal instead of the typical plastic we see most of the time. There are eight fan headers located on the motherboard, including two pump headers that probably operate at full speed by default, and a CPU_OPT header. There are also two external temperature sensors circled in green, and there are included temperature probes that you can stick in a GPU or near an exhaust or intake vent in the case. There is also a noise sensor that attaches to an included mic attachment which can gouge fan noise and you can use that to reference fan ramp up/down curves.

The rear IO panel features a built-in shield, so you don’t need to worry about installing it. Starting from left to right we have a clear CMOS button, a Q-Flash Plus button, a 2T2R WIFI antenna connectors, four USB 2.0 ports, two USB 3.0 ports (5Gb/s), three USB 3.1 type-A and one USB 3.1 type-C port (10Gb/s), an Intel 2.5Gbit LAN port, and 7.1 gold plated audio outputs with S/PDIF out.

The PCI-E slots work as x16/x0/x4 or x8/x8/x4 depending on whether or not a card is entered into the slot second from the top. The last slot is routed directly to the platform controller hub (PCH), which is the Z490 chipset. It operates at PCI-E 3.0 x4. GIGABYTE is one vendor who decided to spend extra money and integrate PCI-E 4.0 hardware, so with 11th generation CPUs, the motherboard will support PCI-E 4.0 for the two top slots instead of PCI-E 3.0 (10th generation CPUs).

We have three M.2 x4 slots on this motherboard. With a 10th generation CPU they are all routed to the PCH and operate at PCI-E 3.0, but with 11th generation CPUs, the center slot will get its own x4 PCI-E 4.0 link to the CPU, bypassing the PCH.

We find six SATA 6Gb/s ports on the motherboard. Two of them (SATA 4/5) share two lanes with the M2M_SB connector. We also find two type of Thunderbolt GPIO headers so you can easily add in a Thunderbolt 3.0 card.

The motherboard features a robust VRM heatsink but also robust power delivery. You typically only need one 8-pin power connector, but here we get two. A single 8-pin CPU power connector can supply up to 300W of power, so here you have the potential for up to 600W. Those wattage numbers are conservative; if your wire gauge and connectors can handle it, and you can cool them down, you can pull more.

We find voltage read points right above the memory slots so you can manually read the different component voltages with a multi-meter. There is also a POST code display located right near the power button on the motherboard. There are also two types of RGB LED headers at the top right corner of the motherboard. One is for normal RGB LEDs with 4-pins, and the other is for addressable RGB LEDs, which is a 3-pin header.

There are status LEDs located in the very lower right corner that can quickly tell you what component isn’t booting. A reset switch is located at the bottom of the motherboard, just to the right of a noise sensor header.

The heatsinks on this motherboard, especially the CPU VRM heatsink are top notch quality. GIGABYTE opted to use copper fins and a direct touch copper heat-pipe as well as high heat conductivity thermal pads to cool down the monster VRM on the motherboard.

The motherboard looks very nice without the heatsinks.

The voltage regulator here is for the CPU VCore and VCCSA. The VCCSA gets one phase, while the remaining 14 phases go to the CPU VCore. The VRM here is overkill, as is the cooling for it, which is good news since it proves you get what you pay for with this motherboard.

The Intersil ISL69269 digital PWM controller outputs 7+1 phases and controls both the VCore and VCCSA power rails. The CPU VCore powerstages use 90A Intersil ISL99390, which is best in class I have seen at least in rating. The VCCSA phase utilizes a Vishay SiC651A, which is rated for 50A.

To get 14 phases out of 7 PWM channels, seven ISL6617 phase doublers are utilized.

The memory VRM uses a single phase voltage regulator, controlled by a Richtek RT8120D. While the memory VRM doesn’t utilize an integrated power stage, it does use two low-side N-PAK MOSFETs and one high-side.

The audio section is physically isolated from the rest of the motherboard as to separate analog and digital signals. The Realtek ALC1220 is the audio codec used here, but to improve audio performance GIGABYTE added in an ESS SABRE ESS9118 reference DAC rated up to 125dB.

The wired LAN port in the rear is an i255, which is a new generation of Intel NBase-T products. It supports 100MBit/1GBit/2.5GBit speeds.

Wireless-AC comes from an Intel AX201, which supports Wireless AX speeds up to 2.4Gb/s.

Here we have more PCI-E 4.0 switches and these have to do with the M.2 slot that can work with the CPU or PCH.

Here we find a USB type-C controller for the rear type-C port on the IO panel.

The hardware you see above is behind GIGABYTE’s USB TurboCharger. A Genesys Logic controller and two step up phases, one for each of the USB 3.0 internal header supported ports.

The ITE IT8688E is the main SuperIO on the motherboard and controls most functions such as fan control.

The IT8795E is a well known GIGABYTE embedded controller used to expand features such as fan control.

The ITE IT5702 seems like it controls the Q-Flash+ function allowing the BIOS ROMs to be flashed without a CPU or DRAM installed.

Here we have 256MBit ROMs, these are quite pricey but will ensure future compatibility with upcoming CPUs.

This level shifter the ASMedia ASM1442 provides HDMI output from a digital video signal from the CPU. 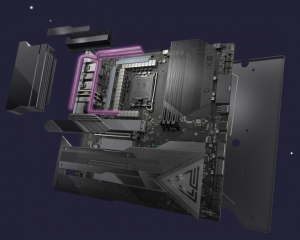