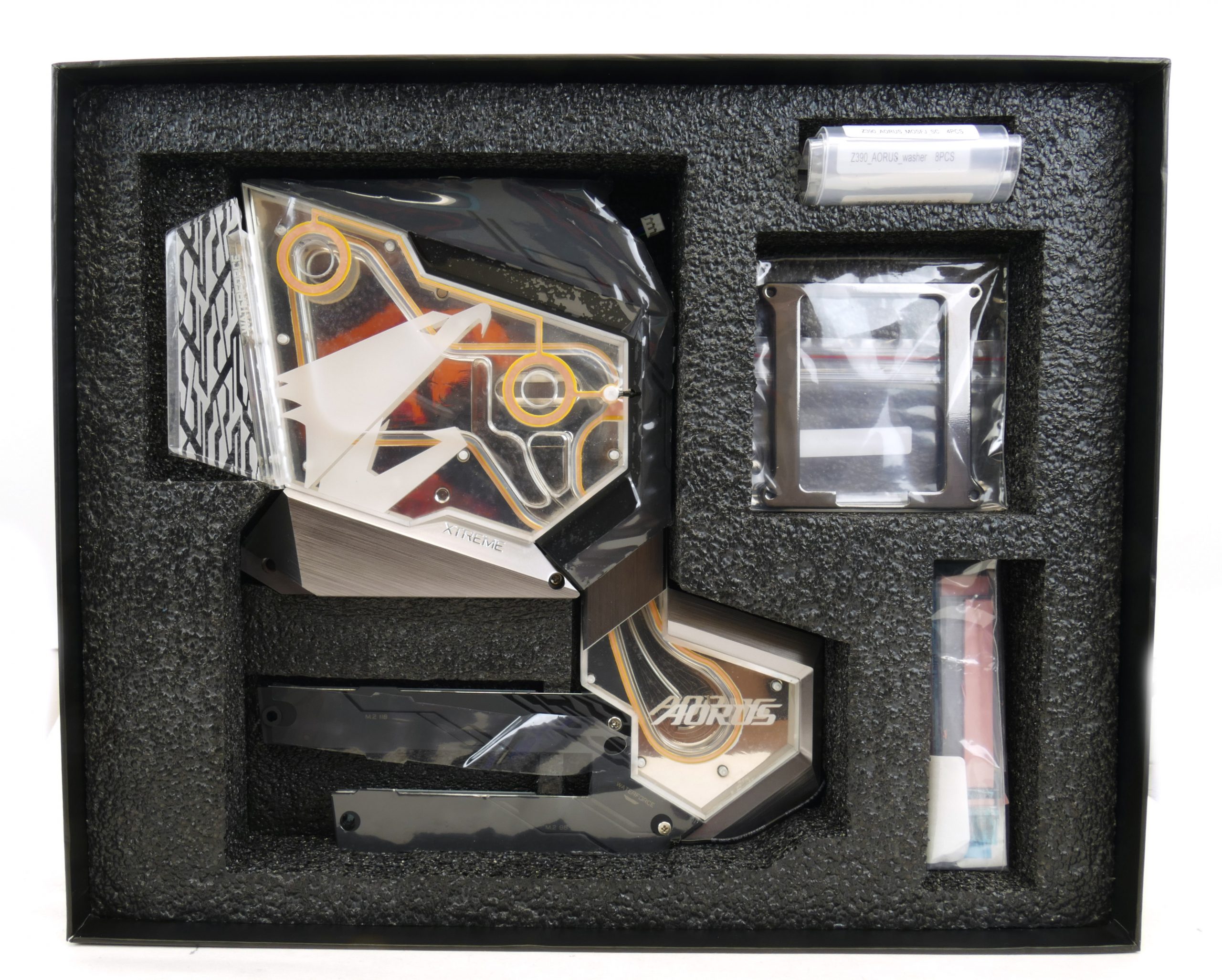 GIGABYTE’s Waterforce series of motherboards are the epitome of high-end, they not only carry the backbone of GIGABYTE’s top of the line Xtreme series of motherboards, but they also come with custom copper waterblocks that cover and cool down the processor, motherboard voltage regulators, high power components, and the chipset. However, these motherboards require custom watercooling hardware to perform correctly, and many people might not know exactly what to purchase to make that happen. Our guide will help walk you through what you need to buy and how to put it together. Thermaltake was nice enough to send us an entire custom copper based watercooling setup, and since the monoblock that comes with the motherboard is copper based, it’s best to also use a copper based custom setup instead of an aluminum one.

Thermaltake sent us the works! Some of which is not required unless you want total RGB LED control of the fans, quick releases for some tubes, and if you are missing a power supply and want one with RGB LEDs. These are top of the line components, and while you can go cheaper, if you have already spent almost $900 on the Z390 Aorus Xtreme Waterforce, you might as well dish out a bit to take full advantage of the motherboard with high-end watercooling hardware. There are a few important considerations when building a custom watercooling system/loop. The first is material, then size, and then of course performance. We are using a Thermtaletake Core P5 open air chassis,, and it fully supports a 360mm radiator and a tall pump/reservoir combination. If we had a fully enclosed chassis, as most people do, we would first want to take and estimate measurements, as there is no way to increase the size of your chassis or reduce the size of some of the other components.

First thing is first, let’s look at the special monoblock waterblock that comes with the Xtreme series of GIGABYTE motherboards. As of this moment GIGABYTE has Waterforce models for all their ultra-premium motherboards for most chipsets, and they all include a copper monoblock with leak detection built in and they are custom designed for each individual PCB. The package typically comes with extra thermalpads in case the first batch needs to be replaced (if you reinstall the block for any reason). They also come with the proper socket retention mechanism for the CPU socket, tons of extra screws, and RGB LEDs built into the block which will illuminate the acrylic cover all throughout.

The motherboard you see above is the Z390 Aorus Xtreme Waterforce, and it has some thermal pad residue left on it, but that is because the picture was taken after I had installed the block the first time. It’s also the reason GIGABYTE gives you more than one set of thermal pads, as these are highly conductive pads, and as such they tend to get a bit sticky after their first application. The motherboard you will receive with a Waterforce model will come without any heatsinks, as the monoblock is meant to be used with it. If you do not intend on watercooling a waterforce model with the supplied monoblock and a compatible water cooling setup, you should not buy the Waterforce model. Instead, GIGABYTE’s high-end Xtreme non-Waterforce models do come with heatsinks and typically have the exact same features and PCB, minus the waterblock header for leak detection and RGB LED support.

The Waterforce monoblock portion comes in a separate box inside the product, and as you can see the thermalpads are already applied for you. You will need to peel off the blue protectors before installing the block. You will also need to remove the CPU thermalpaste guard that is taped to the CPU area of the monoblock. The thermalpaste included is good for only a single application, so if you do reinstall the block you will need to clean the CPU section and the CPU, and then re-apply new thermalpaste.

The first part of the watercooling setup we will focus on is the pump, in this case it’s a Pacific PR22-D5. The D5 pump is well known for its power, and it will be responsible for pushing the water around your system. In this case the pump is not standalone, it comes with an attached reservoir and mounting mechanisms to attach it to your chassis. Pumps can cause audible vibrations, but luckily here we have vibration dampeners included in the package.

Here is what is included in the package. Notice that this particular pump is not designed to plug into a motherboard fan header, simply because it requires higher current than most motherboard headers support; instead you will need to attach it to a MOLEX connector direct from your main power supply.

Here we have our radiator. Radiators come in two varieties; aluminum and copper. Copper is much better, but also more expensive. In this case we opted with copper because the monoblock utilizes copper, and it’s best not to mix and match copper and aluminum.

Here is what is included in the radiator package. When you buy a radiator you need to pay attention to its size as well, this one is quite thick, so make sure your chassis has enough room for it. We should also add that the radiator and the monoblock will increase flow resistance, so you will need to carefully match your pump power to the rest of the system, as good flow is very important to cooling performance.

Fittings are required to screw into the pump, radiator, and monoblock. You will need fittings with the right size to screw into your different components, and you will also need match that to the size of your tubing as well.

These are quick release components, allowing you to break a tube into two pieces and disconnect them without water coming out. They are optional, but a nice addition.

Here we can see the inside of the quick releases. Two very strong springs will gradually close off water flow when actuated. It’s very hard to disconnect either part, but that is because the seal is very good, so you wont have water leaks when servicing your setup.

Here we have some of Thermaltake’s high-end fans. You will want to make sure your fan size matches that of your raditor mounting holes. RGB LEDs are optional, but in this case we enjoy the look of the individually addressable RGBs, as they can product very unique lighting effects.

Here is the entire fan package, and in this case it came with an addressable RGB LED controller. You will plug in your fans into the black box, which will then connect to your motherboard through internal or external USB 2.0/3.0 so you can controller the fans and their lights through Thermaltake’s software.

You can also buy the Thermaltake TT Sync Controller separately.

Here are the contents of the optional TT Sync Controller.

Thermaltake also wanted to spruce up our build with an RGB LED 850W Power Supply. It’s 80 Plus Gold rated, and the fan inside has built in addressable RGB LEDs.

As you can see the Power Supply is fully modular, so you can use as many cables as you need, and there will be little need to hide those you do not since you don’t need to plug in all of them.

The first thing we like to do is to install the fans. You can either install them pulling air out from the radiator fins or pushing air in. The side of the fan without the plastic holding mechanism for the motor is always the intake side. In this case we opted to push instead of pull because we wanted to enjoy the RGB LEDs. If we didn’t we would probably have them pulling air through the fins of the radiator.

The next step is to install the monoblock on the motherboard. We peeled off all the blue protection on the thermalpads and removed the cover over the pre-applied thermal paste. You will want to make sure to install your CPU and M.2 drives before installing the monoblock, and also to plug in the RGB LED and leak detection wire into the motherboard’s dedicated custom header.

At this point we are almost finished. Everything is setup so that all we have to do now is install our tubing. You will want to pre-measure all the tubing, then follow the instructions for fitting the tubing onto the compression/other type of fittings. Follow the instructions that came with your fittings, but they are pretty self explanatory. We should mention it’s not easy to install or remove fittings from tubing, if you can’t get it to work, try a bit of heat from a heat gun on the tubing, but not enough to melt or damage anything.

Here is our final result. We went with soft tubing and clear liquid coolant, but you can go with color coolant and/or hard tubing. The reservoir also has two top holes for tubes. We used on as a fill hole to add in coolant, after we did that we waited for all the air bubbles in the system, especially the radiator to come out. We find that swaying or tapping the radiator and system helps get them our quicker, as air is not your friend inside the watercooling system. Once everything was fine we removed the fill tube, closed the top fill port, and then attached our RGB LEDs and other cool components.

Building a custom watercooling system is not that difficult, as just like a computer, everything only goes in a certain way. However, there are precautions one must take to ensure proper water flow direction, remove air pockets and bubbles, and make sure everything is installed and properly configured. One nice feature of the Waterforce series is the water leak detection unit; all along the water pathway in the monoblock there is a circuit that will monitor for leaks and then relay that information to the motherboard’s firmware. If there is a leak then the motherboard will notify you at bootup and prevent you from booting. It’s a nice extra level of low level firmware protection that will save you headaches. GIGABYTE’s Z390 Aorus Xtreme Waterforce and a custom water cooling setup as the one pictured in this guide will set you back a few bucks, but when it comes to cutting edge performance, there is pretty much no alternative. 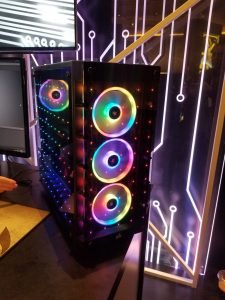 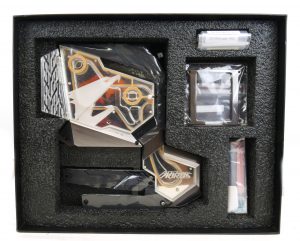 Today AMD launched their brand new Ryzen Threadripper 3990X, poised to be the most powerful desktop CPU ever made. Let’s see how it does.