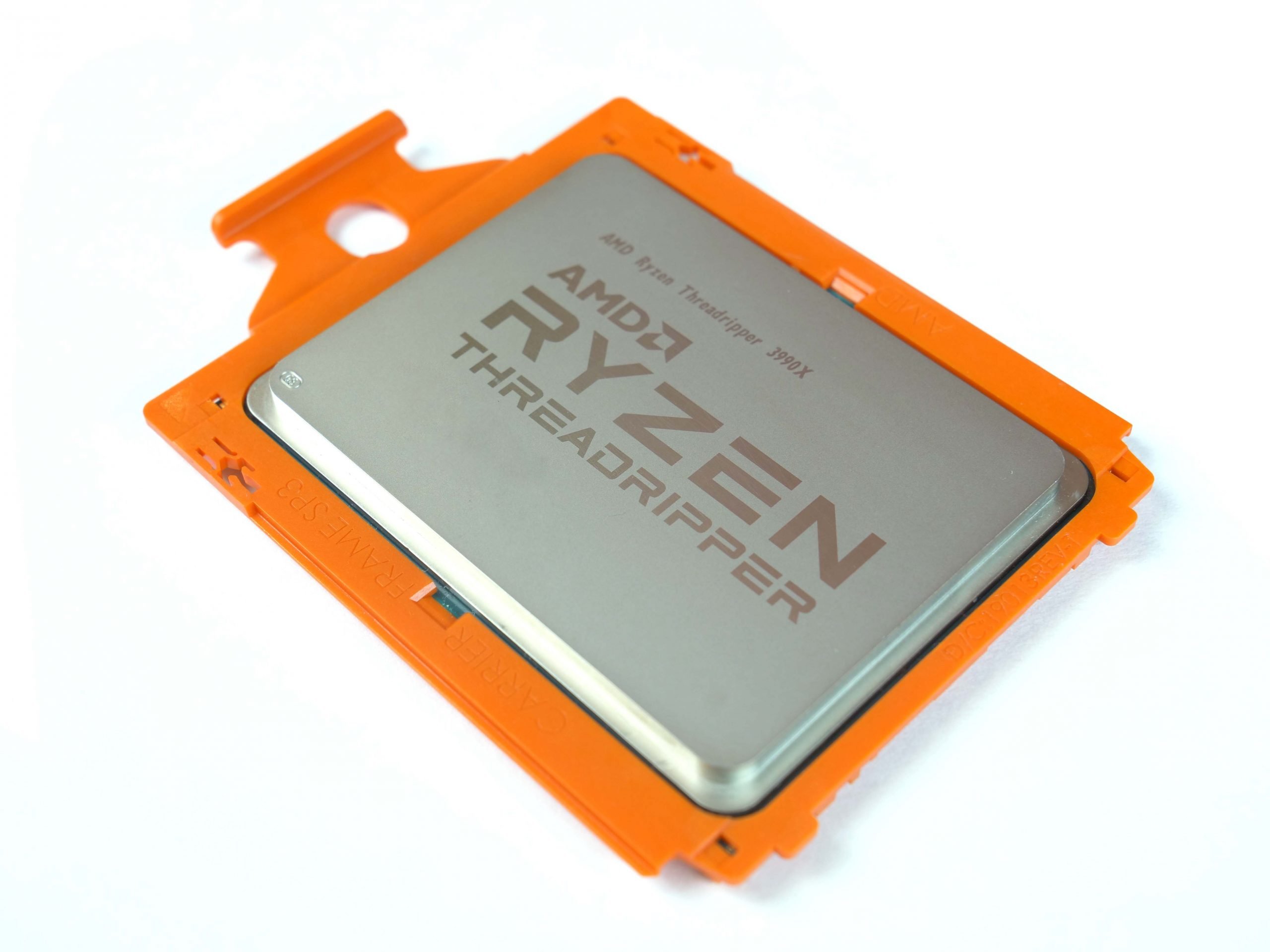 Today, February 7, 2020 at 9am EST, AMD officially removed their embargo on reviews and performance aspects of their beastly 3990X CPU. The CPU is the first of its kind. Costing as much as its model name ($3,990), it’s not only the most expensive Ryzen CPU, but it’s also the most expensive consumer/professional CPU on the market. Aimed at taking over the high-end desktop market from Intel, who only has the Xeon W-3175X as current competition, the new CPU is poised to shake the market up. With 64-cores and 128-threads, the 3990X has more cores and threads than any other CPU AMD or Intel has launched (except for data-center EPYC CPUs). The CPU also has an insane 256MB of L3 cache, a 4.3GHz boost speed, and a base clock of 2.9GHz. Chiming in with a TDP of 280W, it has the same TDP rating as its 32-core and 24-core siblings.

The CPU’s packaging is unique and designed to show off the product. When you remove the CPU from its container, a gold Threadripper logo becomes visible so you can put the packaging on display.

Accessories include a TR4 AIO mount for Asetek all-in-one watercoolers. There is also a Torx wrench for installing the CPU into the motherboard as well as stickers and a warranty guide.

CINEBENCH scales quite well with core count when it comes to nT testing, and it’s clear that AMD’s previous SMT/multi-threading dominance is taken to a new level. At 36 threads the Intel i9-10980XE can’t keep up with the 64-thread 3970X let alone the 128-thread 3990X. Intel still has decent single threaded performance, outpacing the 3990X and the 3970X in SuperPI, but slightly losing to the 3970X in CINEBENCH R20 1T. In Blender it is no contest, AMD’s 3990X demolishes everything including the 3970X, which is far ahead of the i9-10980XE. In AES/Hash/DP-FLOPs the AMD rivals do very well against the sole Intel CPU. In 64-bit integer IOPS, the Intel CPU still does better. In memory tests we see Intel do better in copy and latency while AMD does slightly better in read and write.

While Intel still remains king when it comes to gaming, that isn’t what the 3970X and 3990X are about. They are designed for high-end workstations, but the good news is that they can still play games with ease. What is surprising is how the 3990X is holding up against the 3970X; it’s not falling behind as we expected.

Here is where things for interesting and we almost popped a fuse (literally). In modern times, especially with AMD’s Threadripper processors, Performance Boost Overdrive (PBOD) is the easiest way to take the CPU past default speeds. We enabled PBOD in the BIOS, and then we enabled XMP, both of which are considered overclocking and can void your warranty. However, we saw the Blender BMW test finish in just 25 seconds. That’s about a 20% reduction in render time, which can mean a lot of money for content creators and renders. However, you can see our power consumption in HWinfo more than double from the CPU package (around 300W at default settings), and our wall meter was constantly hitting over 1kW. With PBOD enabled, we were hitting around 100C, which is the maximum we felt comfortable with.

AMD had some tricks up their sleeve to keep power consumption low enough to compare against the 3970X while doubling core count. They reduced operating voltage to roughly 0.9v, while allowing hundreds of amps into the processor. It not only kept power consumption low, but it also kept temperatures reasonable.

The AMD Ryzen Threadripper 3990X is perhaps the most exciting CPU to have launched since the Intel W-3175X, Intel’s 28 core overclock-able processor. However, AMD not only took back its SMT crown with the 3970X, but it basically wipes out the competition with the 3990X. The 3990X is the CPU you want if you can afford it and your PC’s main purpose is to create content and render professional projects. We should mention that the new CPU requires the latest Windows 10 update so that its 64-cores and 128-threads can be recognized, and even then you will need to use the very latest software programs to utilize all the cores and threads. That means if you have legacy software you might not see the full performance of the CPU. While it can still play games, the CPU isn’t designed for that purpose, and I don’t think most people would spend almost $4,000 for a CPU to play games when CPUs under $1,000 can do better. The 3990X is an incredible CPU in what it offers, how it was designed, and what is represents. The ecosystem for the CPU is strong, but we should warn you that motherboard choice is going to be very important for getting DRAM speeds above 3200MHz, especially with dual-rank kits. Nothing about the 3990X is cheap, but if you can reduce rendering time in half, utilize more than 32 cores, or want one of the best content creation CPUs, then paying double for the 3990X over the 3970X could very well be worth it for you.

(583)
$182.99 (as of February 1, 2023 16:29 GMT -05:00 - More infoProduct prices and availability are accurate as of the date/time indicated and are subject to change. Any price and availability information displayed on [relevant Amazon Site(s), as applicable] at the time of purchase will apply to the purchase of this product.)

(928)
$276.99 (as of February 1, 2023 16:29 GMT -05:00 - More infoProduct prices and availability are accurate as of the date/time indicated and are subject to change. Any price and availability information displayed on [relevant Amazon Site(s), as applicable] at the time of purchase will apply to the purchase of this product.)

(9859)
$127.98 (as of February 1, 2023 16:29 GMT -05:00 - More infoProduct prices and availability are accurate as of the date/time indicated and are subject to change. Any price and availability information displayed on [relevant Amazon Site(s), as applicable] at the time of purchase will apply to the purchase of this product.)